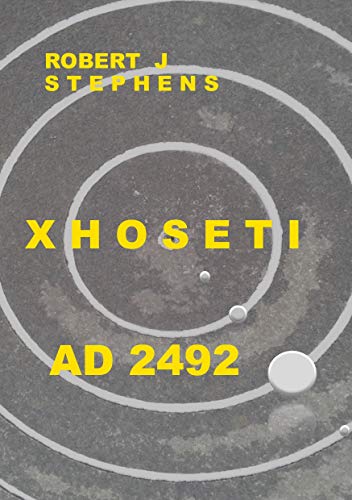 Xhoseti AD 2492 by RJ Stephens is a dystopian, mind-warping read. We are introduced to the Guardians, who are concerned about the inevitable attack of the Xhoseti. This time around, the plan is to revive Earth and train the humans so that they may be ready for the Xhoseti attack in the far future. Chris, the grand-master is to control the fate of Earth and its inhabitants. Humans are to be shepherded onto the right path, an unsurprisingly difficult task. The book navigates through crucial turning points in history. These events are retold in a surprisingly believable manner. Everything from the Spanish inquisition to Nazi Germany was laid out, dissected, and manipulated in the story. The Masonic association and pyramids feature heavily in this book, complementing the doomsday conspiracy atmosphere of the book.

Similar to its sequel, Xhoseti Moon, this novel creates an immersive and intricate universe. It snaked its way through space and time, leaving me pleasantly disoriented. However, I found myself drifting off during the explanation of technicalities. Although they were imaginative and thought-provoking, some of them ended up being too lengthy for my taste. The futuristic technologies like the morph suit, neuralink, and mind dump were intriguing, but a little too well-explained.

The author did not hold back on the vivid and gory details of disturbing scenes- this one is not for the faint-hearted. Cannibalism and historic cruelties were laid out in their full glory. My favorite part of this book was the revisiting of historic characters. There were plenty and all of them were wonderfully fleshed out. I never tired of encountering the royalty, peasants, and people across the centuries. Chris is a masterfully created character- all in grey. Some of the things that he allowed to happen were hard to stomach, and his reasoning behind them even more so.

I had read Xhoseti Moon first and went in expecting the same sort of sci-fi thriller content. However, I was pleasantly surprised. Xhoseti Moon was an intense and thrilling ride but Xhoseti AD 2492 takes a more intricately interesting route. I don’t know whether or not I agree with the philosophy of the ends justifying the means, but I look forward to a long, bloody journey with the Xhoseti.