← Journey to the Children of Bwola Dances
The Fate of Wolves → 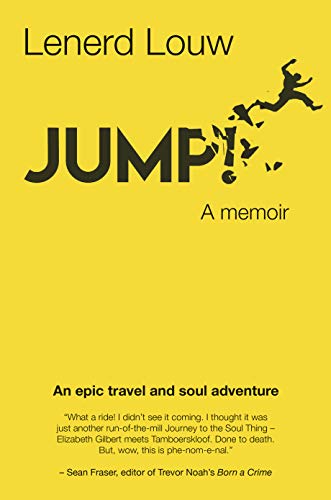 Not many people are attentive enough to hear an inner voice let alone listen to it. Lenerd Louw had always had a small voice inside of him urging towards a direction he had never taken before. The voice was leading him to veer off a life he had always lived, enjoyed and took some measure of pride in. The voice only grew louder over time. Then Lenerd took the time to actually listen to the voice. He took the time to audit his life and venture into the unknown with nothing but a large backpack. Five years later, he has a new outlook on life.

Lenerd leaves nothing to the imagination. He lets the reader deep into the belly of the story. He tells such a vivid story that while he is momentarily mesmerized by the Jacuzzi fire, the reader will be right there with him. You can almost smell the cocktail of diarrhea and vomit when he attempts to rid himself of parasites.

His style of telling his story is completely engaging and involving for the reader. There is an authentic air about the author. Even as he accuses himself of in-authenticity, the fact that he is questioning means that it lies somewhere within him. You can tell that he is not in any way completely devoid of it. This quality comes through in the way he tells the story as well as the events he chooses to highlight.

This was definitely a story worth telling. It is a story of triumphs. Often people think that those perched atop privilege and success have it easy. Truth is that they too, undergo the same kind of struggles that everyone does. In that sense, this story is relatable. Although the reader may not have the means to traverse the world like he did, Lenerd’s experiences and his candid narration of the story connect him to the reader right from the beginning.

Although I liked the book, I felt that the story tended to jump around without notice. This left me a little confused at times, like when someone digresses when they tell a story. Regardless, you will enjoy Lenerd’s discovery of self.

The reader will be gripped right from the scene by the fire with the two girls on the table to his recall of the Café at the Edge story. Everything in between will be a beautiful roller-coaster. Speaking of the story, it is the perfect ending to a great story. It is so apt and fitting and wraps up the book quite nicely.

← Journey to the Children of Bwola Dances
The Fate of Wolves →