← Saul of Tarsus
A Gangland Problem → 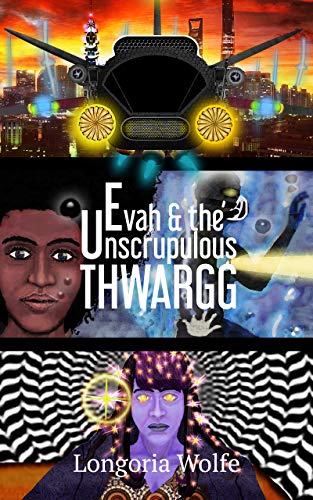 Evah & the Unscrupulous Thwargg follows a young girl who must contend with bullies while being haunted by disturbing visions. She slowly uncovers a connection she has with an ancient tribe of people who were exterminated. She must find out why she’s been chosen, overcome the strange phenomena plaguing her life and take control of her destiny.

Longoria Wolfe has written a compelling science fiction story that is supported by a curious mystery which unravels through a thrilling adventure. When the book started I thought Evah was a fairly straightforward character, but I was pleasantly surprised when her character quickly gained complexity as her connection to the supernatural tribe was revealed and events are set in motion which provide compelling obstacles for her to overcome.

Evah & the Unscrupulous Thwargg is an immersive story that efficiently handles backstory so that we can focus on character development as well as the eerie mystery at the heart of this riveting novel. I admit that I had to stretch my imagination a bit because some of the things, and places, Evah encounters along the way superbly capture a fantastical surrealism that I wasn’t prepared for.

What I enjoyed the most was how everything is kept grounded by motivations I could understand. Even the strange aliens had desires I think readers can relate to, and with that I was reeled into a fast paced story that I heartily enjoyed.

Exceptional storytelling elevates this odd story line into a novel that is unique and hard to put down. I hope there’s a sequel in the works as this story left me wanting more of this world. Longoria Wolfe is able to twist common story tropes and prose into something that strangely intriguing. This is a thrilling science fiction story that I would recommend to readers seeking an adventure unlike any other.

← Saul of Tarsus
A Gangland Problem →