← The Art Of Losing
In This Dark Zombie Wasteland → 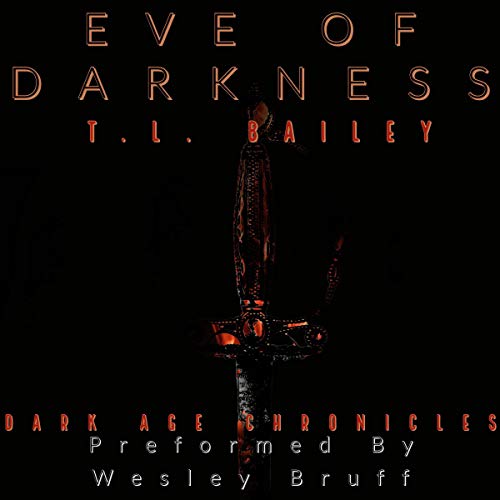 Eve is a young woman caught between what she wants to do and what she must do. She has been marked, cursed if you will, and survived a childhood of abuse from her sadistic grandfather. A cruel taskmaster and slave owner, her grandfather, knows of her ability to see the future and perceive the true intentions of others. He has squelched her ability most of her life, and his fear of her has led him to regularly administer abuses to her that far outweigh what he shows his slaves. Now, also facing the idea of an unwanted arranged marriage, Eve receives a letter telling her that her help is needed–and her life has been a lie.

The Dark Age Chronicles: Eve of Darkness, by T.L. Bailey and performed by Wesley Bruff, has all the darkness professed in its title. The title character, Eve, lives a life so full of turmoil and fear it’s a true miracle she has the strength to face each day. Her grandfather’s evil nature is incredibly difficult to imagine, and it has created a magnificent strength in Eve that rivals that of any superhero. Her gift makes her a liability, but the more she is feared and the more she is pursued, the more invincible she becomes. Bailey’s choice to have Eve be a young nineteen-year-old girl is a fantastic one. These are formative years, and the horrors Eve is forced to endure would make anyone at this age crumble and give up on life.

The narration by Wesley Bruff is absolutely mesmerizing. Straight out of the gate, readers will appreciate the tone with which he delivers the story, the change of accent, and modulation. A dark and horrifying story calls for a performance that can communicate the atrocities effectively, and Bruff does that tenfold. His narration makes me forget who and where I am–honestly a stunning performance.

Readers who enjoy fantasy will find Eve’s plight enthralling. Her journey is one of resilience and determination, and her story is one readers won’t want to put down. I highly recommend Wesley Bruff’s narration, as well. It is not often you find an audio book so full of rich visuals. The Dark Age Chronicles: Eve of Darkness, the audiobook, is not to be missed.

← The Art Of Losing
In This Dark Zombie Wasteland →