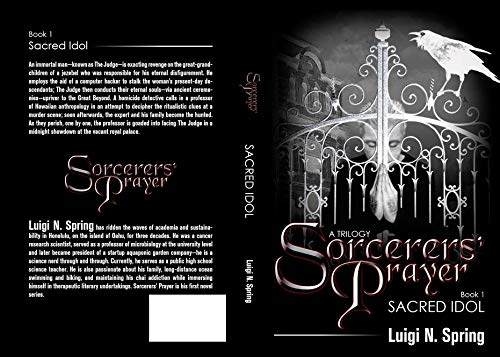 Kawika has just lost his wife of many years to cancer. He looks to live through the gut-wrenching pain and move on with life. But little does he know that he’d soon be running to preserve his own life. It all begins with the murder of a financial expert on the Hawaiian island where he stays. The unfortunate victim appears to have died in the strangest of ways. Joe Adams, the lead detective investigating the case then opts to bring in a Hawaiian anthropology expert to make sense of the ritualistic elements littering the crime scene. Kawika – a professor of Hawaiian anthropology – takes up the task and begins to uncover shocking truths alongside the detective. They find evidence suggesting that the murderer would kill again and Kawika and his relations are among his potential victims. But who is the mysterious killer and why is he on a mission to take out the descendants of the members of an ancient Hawaiian cult?

Luigi N. Spring does something special with Sorcerer’s Prayer. It’s a gripping Hawaiian tale dripping with suspense. A real page-turner that had me channelling my inner Sherlock Holmes in an attempt to solve the story’s mysteries. Written in an immersive style, Luigi was able to pull me into the story. On more than one occasion, I found myself muttering warnings to characters who were about to meet their doom.

Luigi sets the stage of the story on the captivating Islands of Hawaii. This allows him to weave thrilling bits of the Hawaiian culture into his tale and this adds so much color to the story. From the society’s history to the people’s language and practices, Luigi gives us a good descriptions of Hawaiian culture without appearing to take me through a history lesson.

Apart from making the cultural details of his setting fun, Luigi also includes them smartly. He sprinkles these facts in a way that they wouldn’t distract you from the book’s plot and themes. He ensures that his thoughts on the human mind, retribution, inclusion and love aren’t drowned out by the noise of too many details. This also allows the personalities of his characters to shine through. Kawika was particularly fascinating – a typical example of a seemingly weak protagonist who ends up rising to the occasion.

The author is a fan of mystery thrillers and claims to have been inspired by the works of Dan Brown and James Rollins. There’s no doubt he chose good models and didn’t do too badly with this book. If you have enjoyed the works of Luigi’s mentors, his style isn’t a far cry from theirs.