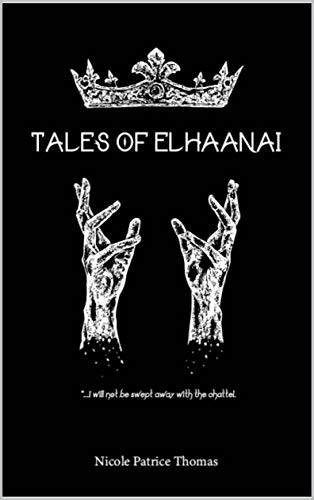 Tales of Elhaanai, by Nicole Thomas, is a mystical fantasy tale of power and betrayal. It is a book that follows the rightful heir to the throne of Elhaanai on a journey to regain his destiny. In the thirst for power, the King of Elhaanai is killed by his sister and is also after the life of the Queen of Elhaanai who is pregnant with a child. She gets cornered and shot with an arrow. However, she is determined to save her unborn child and so through a magical ritual, the Queen puts the soul of her child into a widow named Wleia, who herself is already pregnant. Wleia gives birth to twins. Sixteen years later, the son Eric and his twin sister from Wleia set out to regain the throne which was snatched from his parents and is his ultimate destiny.

Tales of Elhaanai is the first in a series of fantasy books by author Nicole Thomas. This novel delivers the perfect setup for a series that will be steeped in family rivalries and bitter battles for power. Nicole Thomas is a wonderful story-teller and immediately pulls you into the book with plot twists, magic, suspense, and much more, from the very start. The characters are well-written with a uniqueness to each of them. One of my favorites is Wleia who is wise and fierce but kind at the same time. She is the unsung hero of this book. However, Nicole still manages to not let the reader get lost in too many characters.

This was a very gripping read with the theme of good vs. evil embedded throughout. The novel is fast-paced and the character development is strong. Another central theme of the novel is Faith. Walking on the path of destiny to regain the lost destiny requires a lot of faith and it is well incorporated into this novel.

The writing is sharp for a first-time writer. Although I would have liked to explore the preceding life of the Queen and King of Elhaanai a bit more and in the beginning, it is a bit harder to make sense of where we are starting, the novel is still engaging for the rest of the story.

The words are crisp and clear and the ending leaves you wanting more. I believe Tales of Elhaanai can be enjoyed by both young adults and new adults alike. Tales of Elhaanai is a very entertaining fantasy novel that was hard to put down.