← The Cardiff Giant
The Pearl Territory: A Surreal Drama → 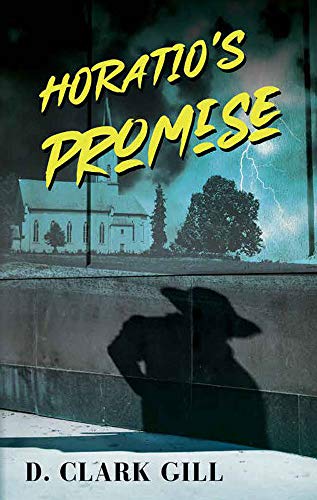 Horatio’s Promise by D. Clark Gill is a historical fiction story set in the Arkansas Ouachita Mountains in 1950. Alfred Spellman, a high school janitor, travels to the town of Horatio’s Promise, where he has spent summers as a children’s music teacher for the past two decades. He again stays at the boarding house owned by Leonora White. But things are different this year. The landlady’s son, Icky, asks Alfred to find out what happened to his father in 1935 when he disappeared, and a polio epidemic threatens the town. Will Alfred discover that Horatio’s Promise is not the idyllic home he had always believed?

This book provides an interesting perspective on the similarities between the polio epidemic and our current health crisis situation, like the lockdowns and not gathering in big groups, and people thinking the outbreak is a hoax faked by the government or a plot by a foreign power to kill Americans. Author D. Clark Gill made me want to learn more about that time in our history because he capture that time period in an authentic and immersive way. I liked the historical setting of this story, and the specific time period of 1950, which reminded me of my grandparents’ small-town experiences. I could picture my grandparents living a similar everyday life to that portrayed by the author at the beginning of the book. I liked the setting of Horatio’s Promise with its small town atmosphere and the author’s descriptions of shops along Main Street and historic homes. Having such a distinct town may the mystery element of this story all the more enjoyable. Like the small town of Derry in Stephen King’s IT, it helped set the tone of the novel. With Alfred searching for clues about Linwood White’s disappearance in 1935. With an intriguing plot and unique twists that surprised me several times near the end of the book.

While I enjoyed this story I felt that it started out a bit slow with lots of internal dialogue and thoughts of past events and details about various secondary characters. While this did help the reader feel empathy for the characters later on, as they battled sickness and death in their families. I wanted to get right into the mystery of the disappearance of Linwood White, but it was a ways into the book before this was mentioned. And the outbreak of polio did not start until about halfway through.

With that said, Horatio’s Promise by D. Clark Gill is still an intriguing mystery novel that easily pulls you into a quaint town and slowly unravels an absorbing enigma that will delight crime fiction fans.

← The Cardiff Giant
The Pearl Territory: A Surreal Drama →