← The Smartest Person in the Room: The Root Cause and New Solution for Cybersecurity – Book Trailer
Despite the Devil → 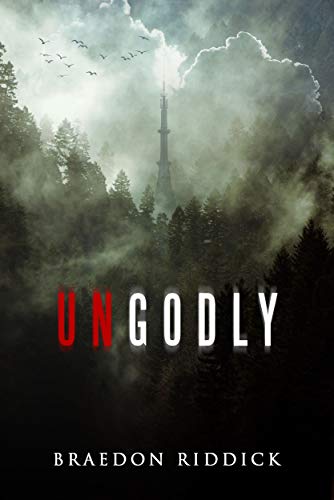 Ungodly is a chilling horror thriller written by Braedon Riddick. There is a fascinating, albeit disturbing, concept explored within the pages, reminding me of the eerie feel in Stephen King novels, but a bit more expressive rather than reminiscent. Set on Calisade Mountain College, Ungodly begins with a thwarted plan from a troubled teenager who aimed for mass murder. The mass murder may have been stopped but an unseen aftermath, possibly worse than before, now takes place.

There are more than a few characters in Ungodly, some wildly different while others seem similar in certain regards, but there is one word that can describe every single one of them; flawed. Author Braedon Riddick went far to set up realistic character flaws, then to delve in and show how these can control someone or affect them silently. I appreciated how these were portrayed as realistic flaws, from a drunken abuser to a cheating spouse, and all the characters, victims included, don’t always have a good ending. I had some trouble connecting with particular characters, which I assume was the point, but it did make me reluctant to read a few chapters. Eventually, this balances out with character strengths and relationship growths throughout the story. The relationship between our protagonist Amanda and Brian was a breath of fresh air from the horror and suspense filling this book.

Braedon Riddick’s prose is a big highlight in this novel. He has the ability to evoke some raw emotions with simple but effective language. There are many scenes in Ungodly that froze the air still and silent before shrieking in the reader’s face. The atmosphere was incredibly eerie for the first two thirds before propelling readers towards the climax, and that may be because of how effectively the author writes fear of the unknown. However, the novel takes place with multiple timelines shifting between many perspectives. This can take a while to get used to and takes some time to get emotionally invested in the characters because we’re hopping from one character to the next.

Following incredibly authentic, and flawed, characters made me want to push through the slower parts of the novel. The second half had me completely immersed in the story. By the ending, I rooted for our main cast, nervous for what may happen but excited to see where it would go. Ungodly is a horror novel for readers who enjoy slow building thrillers with a thick atmosphere and a dark but gripping story line.

← The Smartest Person in the Room: The Root Cause and New Solution for Cybersecurity – Book Trailer
Despite the Devil →