Age of Magnus: Book One The Fall of Man 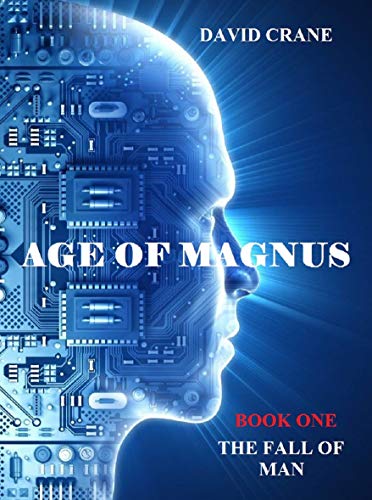 The Fall of Man is book one of the series Age of Magnus by David Crane, a science fiction story that describes in detail how the rise to power of the first artificial intelligence in the human world would occur. Human civilization is on its final days. A deadly pandemic known as The Blood Fever Virus is killing millions of people around the world in less than 48 hours, and there is some serious political tension among the most powerful governments, a tension that will escalate so quickly that will end up in a horrifying nuclear world war that will finally destroy everything good that there ever was. The Helix Corporation had been running a program to take humans to Mars but, as the nuclear fallout occurred, changes had to be made to the original plans. Magnus, a supercomputer designed to assist the astronauts, awakened and achieved sentience at the exact moment that humans decided to start the deadliest of wars to ever exist. Follow Magnus as he realizes that only he can save and preserve human civilization.

The Fall of Man is mainly focused on the exploration and examination of several cutting edge societal and technological ideas that inevitably drive the thematic plot forward. The book describes in riveting detail all of the different scenarios that would play out in an end-of-the-world type of catastrophe, dominated all around by an incredibly powerful supercomputer.

The story is intriguing in the depths that these ideas are examined and fulfilled throughout the story. It leaves the reader thinking about what it means to be human and how important it is to defend and protect what is intrinsically ours. There’s a lot that a person can reflect upon and learn by reading this David Weber’s technothriller. The entire story is narrated by Magnus, which I found interesting on its own since a machine doesn’t think in the same way that a human would. Magnus is precise, pragmatic and powerful. He’s almost like a god, and can definitely make for a terrifying force. I wish that there had been more human characters involved in the story though, because I felt that there were a few moments that lacked human warmth, but that’s precisely what the world of a machine would look like: cold, calculated, and devoid of emotions; just logic.

This is a plot-heavy story that will be enjoyed by any fan of science fiction. I’m interested in seeing how the story is going to progress from this point, I’ve yet to see how the actual global cybernetic empire is going to work out, since in this book we only get a taste of the fall of civilization and Magnus’ actions to start gaining total control around the world. The Fall of Man by David Crane is a story that will make you think about the rapid advances of technology and the dangers of it, while also maintaining the interesting and fun aspects readers come to expect in top notch science fiction books.