← The Eyes of Summer: Another Summer with Ian and Dee
Who Okayed This?! The Riveting Life of Grant Davis – Book Trailer → 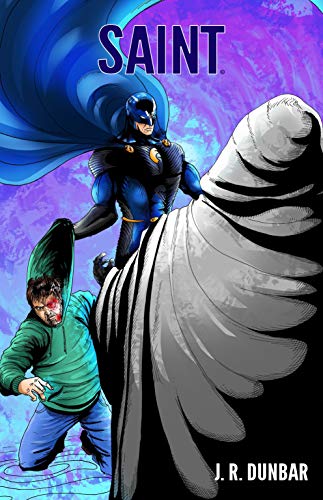 Saint a graphic novel by J.R. Dunbar is a compelling and kinetic action adventure comic that is a strong addition to anyone’s graphic novel collection. At its heart, Saint is the story of a child who is consumed by the superhero genre. He dreams of the day that he’ll become a crime fighter like his favorite characters. This becomes an obsession that sets his his life on  a singular course.

Unlike many reluctant heroes, he undertakes the hero’s journey out of the desire to do good. To make a difference. Helping others is a principle factor in his development, which is refreshing to see in an overcrowded superhero market where so many main characters have tragic backstories, or are conceited, self-centered people forced to change, even Clark Kent in the new Superman movies is being bent in this new direction of dark hero’s. J.R. Dunbar has created a hero who aspires to do good, reminiscent of the classic comics of the genre, but he’s able to do it with a gritty contemporary feel that never feels out of place with today’s comics.

The artwork has a unique sketched art style with lots of bright colors that contrasts with the darker shading throughout the story. Some scenes are very detailed, even gory, but other scenes have a flat color that I would have liked to have seen given some texture. One scene I really enjoyed is the one where one character is crushed and the blood spatter comes out of the cell; very fun, unique and vivid.

Saint has plenty of profanity and graphic violence, if that’s what you’re into, but we’re also given a great action packed story that puts our hero to the tests in some very creative ways against some bad guys that are interesting and well crafted. This is a graphic novel, as it combines several of J.R. Dunbar’s comics, so readers get a more well rounded story arc then what’s found in a regular comic. If you enjoy a backstory that’s detailed and provides ample time in fleshing it out then you will definitely like this graphic novel. This is all the character development we get as we’re only given a bit more pieces throughout the novel as Saint fights crime in a uniquely Saint type of way.

Saint is an interesting take on the super hero genre. A great addition to anyone’s graphic novel collection. This is an imaginative story that will hook readers with a well-conceived story line and a likeable hero.

← The Eyes of Summer: Another Summer with Ian and Dee
Who Okayed This?! The Riveting Life of Grant Davis – Book Trailer →