← Let’s Talk! A Story of Autism and Friendship
ARIESSY OF MIDGARD – Book Trailer → 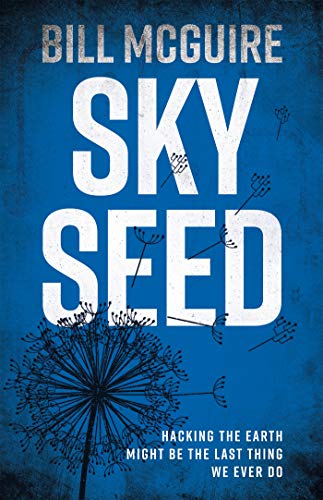 Sky Seed by Bill McGuire transcends genres. It starts as a mystery with light espionage and ends as a dystopian near future novel. There are three main protagonists, but several chapters are written from the perspectives of side characters as well. The book starts with an enormous eruption that sends ash spewing into the air. Months later, Jane discovers a terrible secret exacerbated by that explosion. There are small, perfectly spherical, carbon-shelled objects floating in the air and raining from the sky. Jane has to tell someone, anyone. She sends her findings to a colleague. The next day someone tries to kill her, but also successfully murders other scientists who have realized the truth. A week later her package arrives at her colleague’s office. He reads it over, panics, and calls in another co-worker. They (Karl and Ralph) realize something extremely sinister is afoot and the world will not be safe if this stays hidden. The three set off to try and save the planet from a diabolical scheme while putting themselves in danger.

Sky Seed is a thrilling global disaster novel that feels authentic due to the grounded storytelling and scattered use of jargon and tech that make this story feel real, add on a climate disaster that speaks volumes on contemporary climate issues, and you end up with a novel that is very realistic. It takes a very valid idea, then shows how that idea could actually be more harmful in the long-run. Even though this book is designed to entertain, I do feel I learned a bit more about climate science by reading this. I liked the subtle addition of humor lightly scattered throughout the story. It really helped to bring levity to some dense and serious sections. I will not ruin the punchlines by sharing them here, but brainy humor is my soft spot. (I see your Hitchhiker’s Guide to the Galaxy joke and very much appreciated it in part 3). The story and plot line are solid and overall I loved the story.

← Let’s Talk! A Story of Autism and Friendship
ARIESSY OF MIDGARD – Book Trailer →