← Drowning My Suspicions
The Sound of Her Voice → 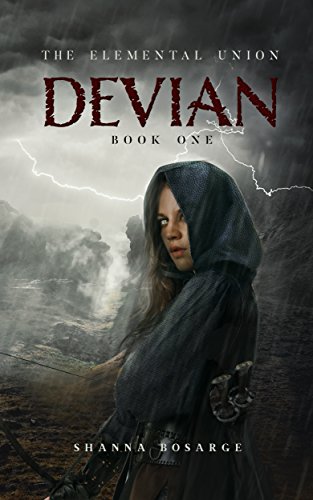 Devian (The Elemental Union #1) by Shanna Bosarge follows Sterling, a silver-eyed orphan whose past is revealed to her on her 21st birthday. She learns that her race puts her in a dangerous and precarious position in society. As a war of the race rages on, Sterling has to fight for her future in a world where few trust her kind. Her journey takes her to Kai’Vari, her place of birth. On the way, she has to make decisions that could spell the end for the few people she holds close to her heart.

Author Shanna Bosarge has created an intricately designed fantasy world with plenty of intriguing history in this novel. It took me a while to get the hang of all the terminologies the author used but I started to catch on about halfway through the book. An detailed and very handy map is also provided at the beginning.  Once I was immersed in the world, I really appreciated the detail that went into the world-building. Even the chapter names are unique and add depth to the narrative. Sterling and Brom are individually well-developed characters. The author strikes a great balance between making them special without having them lose their vulnerability. Although I wasn’t fully sold on their relationship. I think Brom was introduced and brought to the forefront pretty late in the book, so I was left wanting more room for his character to grow. But I was still rooting for them because they are such likable and authentic characters. Even the side characters were all given their moments and I enjoyed the interesting roles they played in Sterling’s rousing journey.

The author provides plenty of vivid details when it comes to violence in the story. Some of the scenes were fairly brutal but it never became too much for me to handle. I recommend readers sensitive to violence and abuse tread carefully, but if you enjoy Game of Thrones then you’ll find plenty to enjoy in Devian with no worries.

Overall, the pace is great and the tension builds and holds throughout the book. The emotional payoff is totally worth getting invested in this unforgettable book. I was heavily invested in Kai’Vari by the end and will probably take a couple of days to get my head back in the real world.

← Drowning My Suspicions
The Sound of Her Voice →