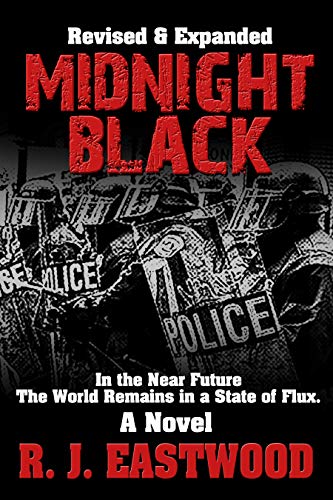 R.J Eastwood’s Midnight Black is a gripping portrayal of the dilemma facing one William Evan Russell (Billy). Billy’s life is a paradox. Having worked initially as a Drug Enforcement Agency agent, he finds himself serving time in a prison located literally out of this world. Without explanation he is released on parole five years early but has to work for the DEA once more, only this time, with different rules of the game.

Eastwood takes readers through an imaginative yet vivid journey from beneath one of Jupiter’s moons and back to a strange world. The protagonist’s hope of returning to earth after 17 long years mining on Europa is smashed upon return to a world unlike the one he remembered. In a twisted turn of events, what had caused his conviction 17 years ago – instant justice served – is what causes him to be released early.  But will he be able to measure up to what is expected of him?

Eastwood’s writing style is rich in character development. Through vivid description, I was able to form clear images of the characters and connect with them on a deep, albeit imaginative, level. For instance, I couldn’t help but fall in love with Billy while hate Chernov. The gripping dialogue Eastwood uses throughout the book not only got me moving through the pages swiftly, oblivious of time passage, but eager to find out what transpires next. As icing on the cake, I found some of these conversations humorous mainly through the author’s expert use of satire. I enjoyed how the author narrates current occurrences while lending the reader a unique perspective. Many current pressing issues, such as the COVID pandemic, are highlighted within the book. The author seamlessly switches from one scene to the next. Each chapter is short but engaging. This is where the genius of Eastwood is clearly visible.

In a way, the book comes as a warning to how the world may end up if we maintain the status quo. Eastwood expertly links current events – spoken as though occurring in some distant past – and links this to what it portends in the present – an imaginative future.

Imagine James Patterson’s Alex Cross but with a science fiction twist. Midnight Black is a character driven thriller that has something to say and knows how to tell a suspenseful story.