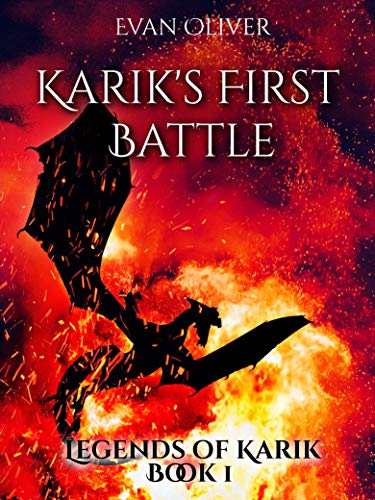 After being exiled from a village unable to sustain him and his friends during the long and harsh winter, Karik embarks on a treacherous journey to find a place to stay. After multiple discussions, Karik convinces his stubborn friends to head north, where they might find shelter in one of the less populated villages. When they stumble upon a small settlement up north and are invited to stay, they reluctantly accept. However, they notice strange details around the village including its saggy construction and utter lack of population. They soon discover that many important events actually occur underground in an elaborate series of tunnels, including a strange pact with a dangerous dragon and dark secrets involving a mythological character. Karik must find a way to defeat this threat lurking in the shadows and keep his friends, and himself, alive until spring.

Kariks First Battle by Evan Oliver is a thrilling high-fantasy novella and is the first installment in the “Legends of Karik” series. However short, this first following an intriguing hero through an imaginative fantasy world that still feels grounded but deep. This reminds me of The Hobbit by J. R. R. Tolkien in that it feels like an adventure that’s playing out in a world with a very deep backstory.

The characters are all compelling in their own way, barely riding the line of fantasy trope but bring enough unique characterization to make them feel fresh and alive on the page. The story feels like a reinvigoration of the type of fantasy story telling prevalent in the 80’s, but with a contemporary infusion of action and sense of adventure.

Kariks First Battle has a creative plot that is propelled by fascinating characters. I really feel like we’re just scratching the surface of something much grander in the Legends of Karik series. If you’re looking for an epic fantasy story where a host of striking characters set out on a dangerous adventure then you will find plenty to enjoy in this book.