← Red Thread of Fate
A Matter of Self-Expression →

THE DESTROYER OF WORLDS: “An Answer to Every Question” 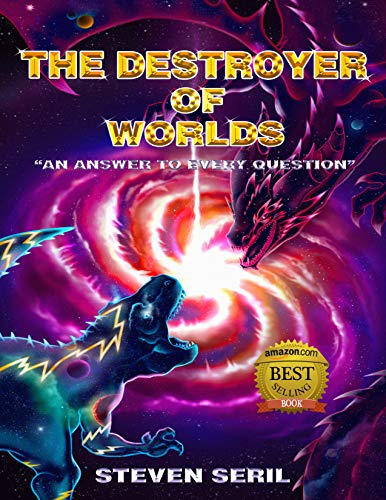 The Destroyer of Worlds is a riveting science fiction epic that keeps the reader on edge throughout the reading. Steven Seril has a creative mind, coupled with writing skills that are out of this world. The narration of events alone will get you hooked on the story from the beginning.

One of the most notable elements in Steven Seril’s writing is the detailed background provided for each character and scenarios before introducing the reader to the happenings. The reader will be given a short story about a particular character, which helps provide enough backstory for readers to get invested, or at least understand, each character. I found this fashion of writing to be uniquely intriguing as one gets to to become familiar with the characters before getting into the action. All characters, whether major or minor had a feature that made them distinct. Every character had a unique role and I was excited to see them in action.

The Destroyer of Worlds follows a story of warring sides, dragons, and dinosaurs. Both dragons and dinosaurs want to be in charge. It was exciting and thrilling to follow the conflict as the tension was high but the drama was subtle. One scene would have you support the dinosaurs only for the author to hit the reader with a plot twist that would have you change sides. Reading this book is a great experience especially for readers that enjoy mythological creatures and stories about cosmic life.

Some of my favorite characters in the book included Athena, Ain, Laurel, Loki, and Azure. I enjoyed these characters because of their well developed and layered personality; some were cunning, strong, wise, intentionally careless to bait others, or just funny. One other thing that stands out is how the author creates new tales while narrating old tales without confusing the reader. There are several instances where one can see the inclusion of a story within a story. This, along with the depth of the lore in this book, amazes me with its creativity and deft writing skill.

The Destroyer of Worlds is a rip-roaring science fiction adventure novel that is consistently entertaining, fun, and intriguing in surprising ways.

← Red Thread of Fate
A Matter of Self-Expression →