← A Matter of Self-Expression
Apocalypse Blockers → 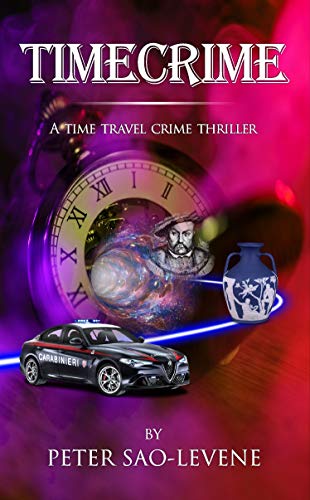 Timecrime is a crime thriller with an interesting time travel twist spun in. The story focuses on Joe Bedford who created a time machine to use for good but that quickly changes when he mixes with his girlfriend’s uncle, a mafia boss named Lorenzo Infanta. Lorenzo uses Joe and the time machine to steal precious artworks to sell for profit, but Joe refuses to let himself be used like this, which sparks a dangerous conflict.

Joe Bedford was a fun protagonist to follow, he had strong desires and an honorable moral compass while having conflicts that gave the character depth and nuance. His love interest, Samantha Infanta, was also very well-written. The chemistry and humor between the two of them felt authentic, however, some of the humor felt out of place, specifically during intense scenes.

The plot was solid, driving the story and characters to the end with a fierce motivation that kept me engaged and the ending was especially impactful and satisfying; partly due to the riveting time travel aspect which is kept relatively simple and straightforward. While I would have enjoyed more scene setting, the action and heist scenes were amongst the most enjoyable moments of Timecrime. The action flowed well and the setting in these scenes was used to great effect as the characters involved the environment in their fighting. The heist scenes were very intense and was something I looked forward to.

Timecrime delivers a unique blend of science fiction and crime thriller in a story that’s punctuated by entertaining moments and a great ending. With a bit of editing this could easily be a standout entry in a deep genre with it’s interesting characters, Michael Bay esque action scenes, and a storyarc that knows how to weave an entertaining tale. Highly recommended to readers who enjoy unique crime fiction novels.

← A Matter of Self-Expression
Apocalypse Blockers →