← Timecrime
A GOD-CENTERED VIEW OF SALVATION → 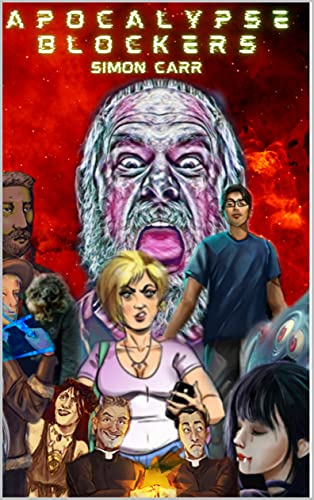 Apocalypse Blockers by Simon Carr is a fun, short story about the end of the world. It is not as serious as it may first sound. In the book we follow a number of different characters that could be described as weird and strange. Each of the characters comes from a different dimension, they are right away forced to unite and join forces to avoid and block the end of everything that ever existed, to be known as the apocalypse of the multiverse.

The book serves as a parody of superhero stories and fantasy adventures. The characters presented are funny and are constantly making the most nonsensical claims possible, all of it adding up to an entertaining, comic-relief type of story. There are gods, priests, vampires, wizards, werewolves and even zombies. Different realities in the multiverse are visited by our group of main characters, in an attempt to block and stop an impending apocalypse in each of them, thus eventually receiving the name of “apocalypse blockers”.

The best part of this book is its creativity and blatant hilariousness that will leave readers laughing. There are many jokes and silly phrases throughout this unconventional story that truly makes it stand out. There are no rules followed nor limits to the way in which the world presented operates, a technique that allows the author to enjoy complete liberty through which he displays ridiculous, yet funny situations. However enjoyable the novel is, I found myself lost in some sections as I found it hard to follows some scene to scene transitions as there was some rather large leaps without reorienting the reader.

Apocalypse Blockers is a book that was written with the idea of fun in mind, its main purpose being to entertain its readers. Each character is unique and humorous in their own way. The humor presented throughout the entirety of the story made for a lighthearted read that included a number of witty remarks. I appreciate how uniquely different this story is from anything that I have read, it is an interesting approach that I would like to see more of in the future.

Apocalypse Blockers is an exciting science fiction adventure story that tells a hilariously wry superhero story that is consistently entertaining and witty.

← Timecrime
A GOD-CENTERED VIEW OF SALVATION →