The Cause of Darkness: A Story of the Civil War 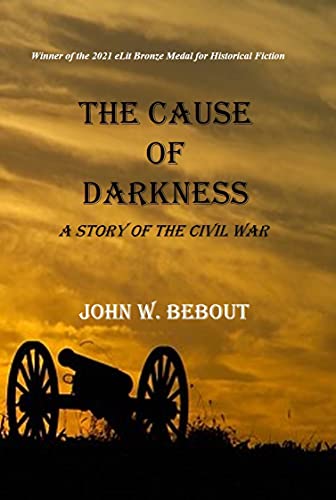 The Cause of Darkness by John Bebout follows a 16-year-old boy, Teddy Miller, when his father gets arrested and sentenced to hang for being a guerrilla soldier. Set in the last year of the American Civil War, Teddy sets out to save his father and is offered help by a number of people. Most of whom, however, have their own self-interests at heart.

This historical fiction novel was a major page-turner for me. Teddy starts as an innocent adolescent but as his family and life is turned upside down, we see him grow and hold many conflicting yet realistic traits as he is forced into this situation, such as being a chivalrous person needing to face some of the horrors of war. This was a fascinating coming-of-age story that felt authentic and was completely engrossing. Teddy, his brother, and a detective helping them, Kate, get involved with many people who seem fixated on furthering their own interests with little regard for the young boys which causes them to develop a distrust to strangers, but conversely, a solid reliance on each other. However, their relationship with each other is also tested harshly, all of this adds to the intensity of the story and gives the story a high level of intrigue the rarely wavers.

It is obvious that the author has put in a lot of effort and research into the time period of the American Civil War as the setting felt incredibly realistic and vibrant. He shows a true understanding of nuanced human behaviors and beliefs, especially during a war and in the 1860s, and the strong research involved grants a lot of credibility to the story being told. An enjoyable cherry on top were the quotes from real-life figures at the start of a handful of chapters detailing aspects of the nature of war and what it takes to participate in one.

While I enjoyed the novel overall, I felt that certain actions by Teddy were frustrating, although this could be attributed to him just being a child. And I felt like the ending left some loose ends to things I wanted answered, but these are things that can easily be left to the imagination.

The Cause of Darkness is an engaging novel with a substantive view of war and human nature that was captivating and stirring. The author has a unique and refined writing style that made reading this thrilling historical fiction novel utterly enjoyable.