← Life On Her Own Terms
There Was Much More To Tell → 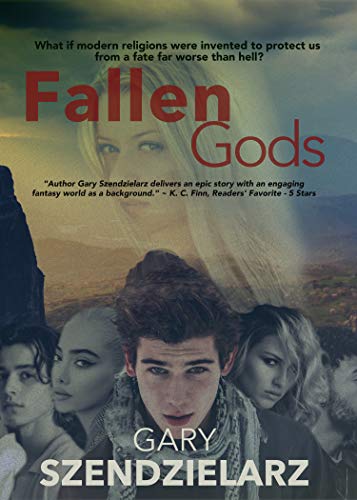 The story of Fallen Gods revolves around Adam Slater, who on his eighteenth birthday suddenly comes into the possession of superpowers, without having any knowledge of where they came from. He decides to travel along with his friends to explore the cause behind this unexpected power, and the abrupt change in his demeanor, from a bullied child to a confident and strong adult. As he travels through Europe, he takes a deep interest in Greek mythology and folklore and attempts to find out why he has been bestowed with special powers.

During this adventurous journey of self-exploration, he encounters four aliens called witches, who might be after him. These women are unimaginably beautiful, but they might have malicious intent. Soon enough, Adam learns about the deep danger that the planet is facing, and also comes to terms with the fact that perhaps he is the only one who can save earth from destruction.

Seeking the truth might lead to more danger, and nobody knows what the future has in store. Will Adam discover the true source of his powers? What does it have to do with the abandoned MI5 agent’s car he found as a kid? These inevitable questions are answered, but with ample suspense and a dexterous grip over the storyline.

This thrilling story follows the classic fantasy superhero plot where the hero suddenly realizes his supernatural powers, an origin story of sorts, but in this unique setup our hero also faces an army of extraterrestrial beings conspiring behind his back. While the tension is high the novel still makes a bold attempt at focusing more on character development. The novel is filled with intriguing characters, and the author has given each one of them a fair share of attention. The story is more character-centric in nature, making it all the more engaging for the reader.

The story is fast-paced and filled with action. The novel at certain points contains explicit language, violent imagery, and excessive action, which may not be suitable for young readers, but will be enthralling for mature readers looking for an intense read. The story demands your full attention if the reader wishes to remember the nifty details that have been incorporated in every section of the novel.

Fallen Gods has an intriguing plot, well-explored characters, and a high level of intrigue that ensures this novel is consistently entertaining. Author Gary Szendzielarz gives readers a thrilling fantasy story that knows how to build up compelling characters and test them in some riveting ways.

← Life On Her Own Terms
There Was Much More To Tell →