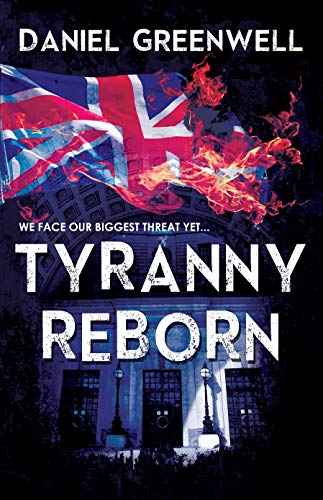 Tyranny Reborn by Daniel Greenwell tells the stories of multiple people throughout a crisis in the UK government, caused by the exchange of a deadly virus between dangerous criminals, as well as rising global tensions. We follow Joshua Price, Prime Minister Wallop, Johnny and Benny, amongst many others, throughout this story, exploring all sides of the conflict. It is a tale of intrigue and fear, with twists and turns that make the story impossible to predict and keeps things wildly entertaining.

One of the strength of Tyranny Reborn is definitely its humor. Despite the heavy subjects and the threats made throughout the story, there was always a lightness to be found with the characters’ dialogue, although that came mostly from Josh Price. His harshness and difficult temper were mixed with such an amusing way of expressing himself that his flaws were curbed by his speeches. I enjoyed reading about the different conflicts that were present throughout the story. With a varied cast, I felt that the story sometimes loses track of the main conflict, but it doesn’t disappoint in the end. The global conflicts, whether with Korea, Iraq, or even the US were intriguing. The side characters also brought more layers and depth to the story, whether it be Josh’s secretary, Maureen, reduced to her role of sweet old lady giving away candies and bearing her boss’ tantrums, or Mrs. Black, the femme fatale who sells the virus. Characters who are usually given little to no voice in other novels are given a chance to be real people in this tory.

I laughed more than I expected, the dialogue is what really pulled me into this story, and I found myself trying to guess what would happen next. Tyranny Reborn is a riveting political thriller filled with engaging characters and an intriguing central mystery.