← I Felt Their Every Emotion
Beyond Revelation →

The Days of Myth 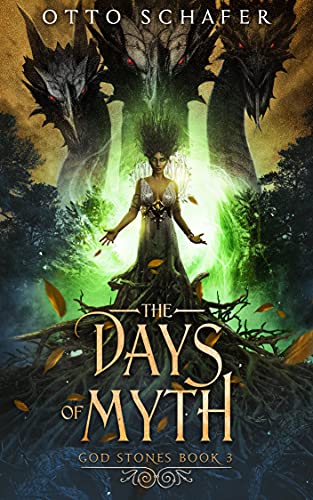 While still coming to terms with his destiny to lead the Keepers of Light back to Karelia, Garrett joins forces with his friends to rescue Breanne. Unfortunately, they face a perilous journey because the world is in utter chaos. Apep, an evil elf, has assembled the God stones to create an army he’ll take back to Karelia, and their power is messing with the earth. Not to mention that the elf is bent on killing Garrett, who has been prophesied to oppose his plan to seize the kingdom of Karelia.

In all of this, an unlikely third player rises in the form of earth’s trees. The God stones have given them consciousness and mobility. However, Apep’s plan to return to Karelia with his army and the God stones would condemn the trees to immobility again. The trees, angry at how man has treated them for centuries, want to retain their newfound freedom in exchange for sparing humanity. Now Garrett and his friends must save Breanne, stop Apep from waging war on Karelia and return to earth with a magical item that will ensure trees keep walking or watch them wipe out humanity.

The Days of Myth by Otto Schafer is the third book in the God Stone series. Not to worry, though; this exciting blend of adventure, magic, camaraderie and fantasy tells a story that you can get into with without having read the past sequels.

Schafer returns with his brilliant writing chops. He creates a steaming brew of steady storytelling and suspenseful moments that will keep anyone engaged as the plot unfolds.

Striking a balance between the familiar and unfamiliar is so vital to excellent writing. With relatable analogies, Schafer brings his story home. Actions, scenes and objects are more vivid due to the author’s spot-on description. I also love how he throws in amusing elements of frivolity like having a deranged, power-hungry elf correcting the grammar of one of his henchmen.

Sometimes you get stripped down stories that turn out flat, and at other times you get tales brimming with too many details. Schafer finds the sweet spot between these extremes. His is an intricate story with details tied together expertly. So you don’t have to stop to scratch your head wondering who’s who or what the link between certain occurrences is.

The book ends with a tantalizing cliffhanger to top it all off. It’s a master class in how to end a novel if you’re planning to continue the story in a sequel. And I sure can’t wait for the next part of the series.

The Days of Myth is a solid epic fantasy novel for me. Think you’re up for some fast-paced, magic-laden adventure? Then grab a copy of Schafer’s gripping piece.

← I Felt Their Every Emotion
Beyond Revelation →