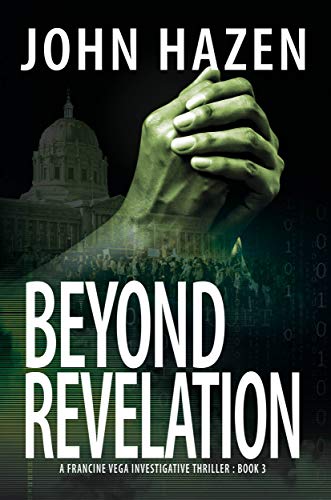 Beyond Revelation by John Hazen follows journalist Francine Vega’s thrilling misadventures and affairs with the FBI. The life of a New York investigative journalist gets shaken up by a sudden disappearance and the consequent doubt that a cult might be behind it. Following the reporter’s investigations, the book takes us through Francine’s, or “Fava”, private life and introduces us to the mysterious world of secret cults and organizations in the United States, along with journalism and into the FBI’s alluring world.

Hazen writes beautifully and manages to give each character its own personality and uniqueness, making the plot intriguing and engaging for any reader who’s got an eye for the thriller genre. His writing style, along with the complex plot, gives the book a fascinating aura and won’t bore even the youngest and easily bored reader.

As a reader keen on details, I appreciated Hazen’s effort in describing action scenes. Sometimes writers can get lost while describing them and the result is a chaotic scene, which doesn’t allow the reader to understand its sense, but Hazen doesn’t do that. Instead, he describes them accurately and allows the reader to understand what is happening.

Furthermore, this novel doesn’t lack in action-scenes and suspenseful moments. It will keep the reader on edge throughout the story with a nice balance of heart-warming scenes as well. All of this is served well by the emotive and authentic characters, making it easy to feel empathy for the characters, even when some scenes are incredible.

With its action-filled scenes, deep intrigue, and wild plot twists, Beyond Revelation is a political thriller that is unpredictable and hard to put down. For readers who enjoy the suspense of the Jason Bourne series mixed with the compelling conspiracy of The Da Vinci Code, you’ll surely enjoy this stirring crime novel.