← The Venus World
Surrounded by Ocean → 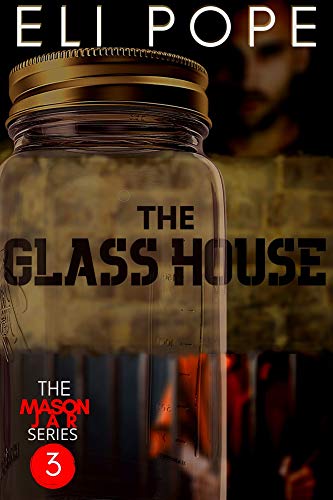 The Cader saga continues in The Glass House by Eli Pope. In this third installment to The Mason Jar Series, we dive deeper into the twisted mind of Billy Jay Cader and the chaos he unleashes on the people around him. Following the events of the last installment, Jay and Darrell are sitting in a jail cell while this tragic story continues to unfold on the outside. The sky is the limit on the secrets that are hiding within the shadows of the small coastal town – what will the locals find out next? What will we find out next?

Pope has done it again! The third installment to the riveting Mason Jar Series did not disappoint. In fact, it was my favorite book out of the current three. There were many improvements to already wonderful aspects, including the pacing, character building, and more. I flew through this installment quicker than the previous two. I was enthralled from page one all the way to the end. Having Darrell and Jay in a confined space together really built the tension for me – it was a fantastic opening plot device by Pope.

Diving deeper into Jay’s psyche was a present I didn’t know I wanted. In The Glass House, we gain a deeper understanding of the thoughts behind Jay’s actions. Pope does an amazing job tackling the idea of a God complex. What is truly right? What is truly wrong? And how would someone so skewed themselves determine such things? That part was an absolute masterpiece.

I would have liked to see more discussion about Darrell and Mitzy in the opening chapters. That was such a captivating part of the story; I was constantly on edge to know more and didn’t get what I wanted until much later.

The Glass House by Eli Pope is a captivating psychodrama that will be thrilling for long time fans of the series and anyone else looking for a contemplative psychological thriller.

← The Venus World
Surrounded by Ocean →