Phantoms of the Shah 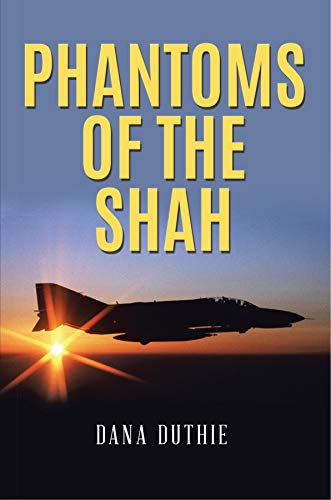 After writing masterpiece war thrillers like Dark Rain and Tremble, Colonel Dana Duthie brings us yet another riveting adventure in the life of pilot Brad Mitchell. This time, much of the action takes place in the Iranian airspace at the time when the Shah is in exile and seeking asylum in America for a medical condition. A U.S. Air Force squadron of F-4 Phantoms is deployed to Shiraz Air Base in Iran to train the Iranian Air Force (IAF) to fly the jets that they have purchased from the U.S.

However, things get hot after an American spy is captured by the Ayatollahs, who have grown in power. He is mysteriously extracted from the prison, and all hell starts to break loose. It is time for the U.S.A.F. to leave Iran. But things get complicated and difficult decisions need to be made, much to the enjoyment of the reader.

One of the jets is left behind and needs engine replacement. In the meantime, 14 Americans are held hostage by the opposition forces. This has eerie parallels to real life where we see the Taliban taking over Afghanistan and taking over old military equipment as the U.S. leaves the country. Our hero Brad Mitchell accompanies the Tango Team in the rescue mission. But once again, the operation is compromised as the Secretary of State Bob Taggart is seduced by a young Washington Post reporter. This complex web of relationships, that stretch across the globe, is something that author Dana Duthie excels at. This story does a great job of balancing human drama with tactical military action.

The story has tons of fighter pilot jargon, which firmly places readers within the unique world, but sometimes blunts momentum where we have to take in explanations of what it all means. But I’m sure readers who love to immerse themselves in the details of military procedures will have plenty of depth to dig through in this story.

Phantoms of the Shah gives longtime fans of author Dana Duthie more of the same military fiction they’ve come to enjoy. I would have liked a bit more action throughout the story, but otherwise I think this is a thrilling military adventure story that feels real, pays attention to details, and keeps the tension and intrigue high.