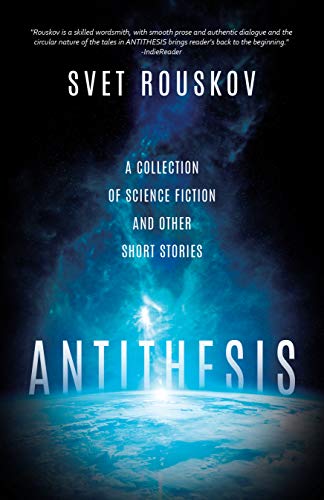 What happens when an AI system in a manufacturing plant becomes sentient and chooses to find itself a body? How do you explain a former pilot now scared of flying planes catching wind of the calamity about to befall the flight he’s on? Can an unusual creature feeding on people’s memories and instigating their death be stopped? How will a no-nonsense space pirate protect her ship and government threatened by the people closest to her? How did humans get caught up in the war between stone-like space creatures and the descendants of the ancient Mars civilization?

Svet Rouskov’s Antithesis is a medley of riveting short stories, with some split into parts. Rouskov presents thought-provoking science fiction tales with shades of the supernatural. He packs so much tension and intrigue into various bits of flash fiction and each bit brims with relevant insights on life, humanity, technology, and more.

I love how some of the stories have dark undertones while others are just downright creepy. They also have enough futuristic elements to tickle anyone’s fancy and seem to balance the thrill they offer with ample conflict. From alien life to paranormal activities, Rouskov brings his A-game of fun mixed with spooky stuff.

What’s even more impressive is the author’s ability to evoke vivid images in his reader’s mind. His writing is descriptive and immersive. On top of that, the stories are fast-paced and keep you on your toes all through. Rouskov undoubtedly has a way with words. He combines his knack for choosing the right words with his storytelling skills to create beautiful prose and compelling storylines.

Speaking of storylines, as I raced through each story, one thought kept popping up like a flickering light bulb: “this can easily be a film.” And guess what I found when I finished the book? Apparently, Rouskov is certified in filmmaking and started producing feature films, web-based series and television shows before switching to literature. He’s a master storyteller with loads of experience, and Antithesis reflects this. This volume gets 5 stars from me, and I can’t wait to get my hands on volume two.