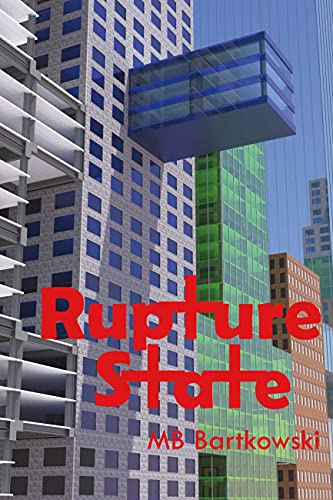 Rupture State, by M B Bartkowski, is the story of an architectural designer, Otto Bonder’s possible ruin. The story opens with a fast-paced bar scene and continues to build the next day when Otto escapes the office for some rest in the park but doesn’t find any. Instead, he hears blood-curdling screams and loud crashing. He fights his way through massive crowds to find the source, and himself, faced with a shocking reality. The possibility of being responsible for a devastating disaster. Physically ill by this revelation, and filled with guilt and fear, Otto, with the help of Tika, must intensely investigate the disaster, and find the cause of the devastation.

Bartkowski’s fast-paced, suspense-building style captured my interest from page one. As the story moves along, Bartkowski keeps the pace building, first at an intermittent pace between the slower character interactions, and then with faster-paced action and suspense. Though he may turn out to be the culprit, the author has skillfully created sympathy for Otto throughout the novel.

The author also creates vivid situations that make the reader feel they are there. I saw the devastation through Otto’s eyes and my heart ached for him. I also appreciated the conflicting interaction between Otto and his supervisor, as well as the guilt-ridden interaction between him and his associates.

The way Bartkowski chose to have the story unfold made me think, through his intense imagery, what it must have been like for those who witnessed, but in shock remained helpless, during the 9/11 attack. The reader, like Otto, sees a disaster unfolding. In his shock and the realization he may be responsible, Otto is helpless to stop what is happening in front of him.