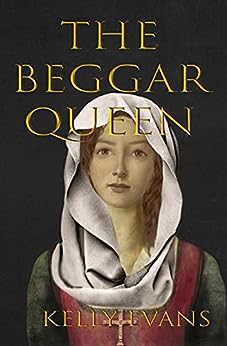 The Beggar Queen by Kelly Evans is an epic rags to riches tale based on historical events. It follows the journey of historical figure, Bathilde, who was captured in 7th century England and sold as a slave to the most powerful mayor in the region known nowadays as France. Throughout the book we accompany Bathilde’s life from the terrible events of her teenage years through her ascension as queen and later retirement to a religious life. Although there are many intriguing characters throughout the story, the majority of which are also historical figures, the main focus is set on Bathilde and her development as a person.

This an enchanting but dark historical fiction story. The narrative wastes no time setting up the protagonist’s life before enslavement, instead opting for a frantic pace where we are thrown into the action right from the start. This is an emotionally heavy book from the start and instills various emotions on the reader but also serves to show Bathilde’s strength. As she quickly adapts to her new life, we see her develop some of her most important friendships, all the while showcasing her intelligence and resourcefulness to the world.

The first part of the book, though smaller in scale, is well developed, as every situation moves the plot forward and is emotionally resonant. On its second part the story takes an interesting turn and then dives into kingdom politics. While the story focuses on political affairs the protagonist becomes somewhat removed from the narrative and we get a chance to see the characters at the eye of the storm.