← The Beggar Queen
The Deal of the Art → 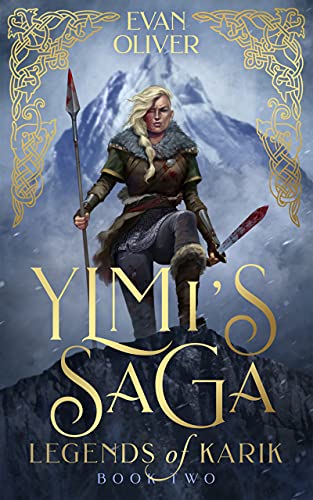 Ylmi’s Saga: Legends of Karik, by Evan Oliver, is the second book in this thrilling saga. Book two begins with a lord of Vrania telling the tale of Ylmi One-Eye. Ylmi is a girl who learns to hunt for the survival of her family. The Jarl of the settlement, Unhost, exiles those who disagree with him and the dragon of the mountain. Unhost made a deal with this dragon to keep the gold found on their settlement. This deal is only the beginning, and the story catapults forward from there.

Ylmi’s character develops in intriguing ways throughout the story, starting out as a cautious girl and turning into a fierce dragonslayer who becomes Jarl of Dragonsrest. Along the way Ylmi bonds with other exiles and they hatch a plan to kill the dragon of the mountain. Together they slay the dragon, go to war, and give the settlement a true leader, and I loved every moment of this adventure.

The writing style is easy and fluid and keeps the focus on the action or characters. While reading you forget that this is a narration of Ylmi’s accomplishments. As a reader you can become immersed in the story and, while it does feel a little fantastic, it still delivers some hard hitting and entertaining scenes fit for Hollywood.

While I enjoyed the story, I felt that there was a lot of background and plot development to get through because this was the second book in a series. Ylmi and Karik’s character were compelling and well developed characters, but I wish all the characters in the book were so well developed.

Ylmi’s Saga: Legends of Karik is a rousing adventure story following a strong female character on a harrowing journey that is fun from star to finish. I would recommend this book to sword and sorcery fans looking for a epic young adult adventure inspired by Norse and Viking myths.

← The Beggar Queen
The Deal of the Art →