Legend of the Horizon Vengeance 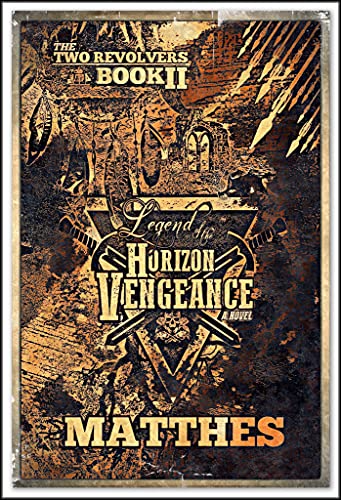 Rancid Mahoney has received a letter–a letter from someone from his past. Someone has gone to a lot of trouble to seek Rancid out. As life has continued following the apocalypse, Rancid has moved on and forgotten much about his life as a young boy. The letter, however, holds the key to a new adventure and a dangerous one at that. The letter requests he make his way to a place called The Throat and to do so as quickly as possible. There are now decisions to be made, and Rancid faces the possibility of a reunion he never expected.

Legend of the Horizon Vengeance, by Dave Matthes, is the second book in The Two Revolvers Saga and follows the apocalyptic life of Rancid Mahoney and the man who took him under his wing. Theirs is a unique if strained relationship. Boarding the Moonlady in order to take part in Frank Delmont’s plan isn’t exactly what Rancid had in mind, but he doesn’t exactly have too many directions to turn. His fate aboard the ship seems sealed–swabbing, scraping, and scouring. Frank seems determined to teach Rancid some survival skills he believes he may still be lacking after all these years apart.

Matthes’s work reads much like a western. Set in apocalyptic times, readers will appreciate the writing style, the absolutely vivid descriptions, and the fantastic exchanges between characters. Matthes does include some particularly graphic depictions of carnage. He paints quite the picture of a world seemingly set on destroying itself.

Rancid and Frank have a strange relationship. Their bickering throughout the story keeps readers on their toes. There exists a kind of electricity between the two, and as much as I wanted them to come to terms with their history and move on, I wanted this dynamic to continue. The two completely make this novel what it is. They possess the perfect mixture of qualities of protagonist and antagonist.

I highly recommend Legend of the Horizon Vengeance to any fans of action/adventure series. I was particularly drawn to the setting of Matthes’s story. I have not often seen post-apocalyptic tales set on the open sea. This one is expertly told, is driven by well-developed characters in a thoroughly engaging plot, and contains the ideal amount of humor combined with peril and suspense. It is the perfect addition to any fiction fan’s library.