Dio in the Dark 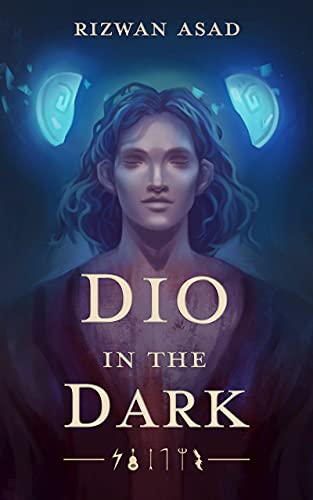 In this modern take on classic Greek mythology, Rizwan Asad creates a world poisoned by darkness in this short novella, Dio in the Dark. Dionysus, “Dio,” is over thousands of years old, and yet, in the twentieth century, he has chosen to play the role of a young adult. Sadly, over the years, he has become moody and depressed; constantly at odds with his father, Zeus. Night after night he explores the city of Toronto going from one party to the next in a haze of alcohol-induced numbness and crowded by sweaty, dancing bodies. One night, after partying and drinking, Dio spots a woman tied to a bridge. He rescues the woman fated to be sacrificed to the darkness only to discover that without her sacrifice the world would be destroyed. With his father missing, it is up to Dio to save the world from an unknown entity.

The author’s passion and creativity are shown through his vivid, descriptive writing. Asad creates an air of humanity around the gods, displaying the worse and the best parts of people. For some minor characters, Asad stays true to their original depiction in Greek mythologies and does it well. Asad changed some of the stories and information from the original mythologies to conform to his story making this an intriguing twist. For example, Semele, the princess of Thebes was not tricked by Nyx (Goddess of the Night) but Hera (Queen of the Gods) when Hera discovered Zeus’ infidelity. Though, true to the mythology, after Zeus killed Semele, he sowed Dionysus into his thigh and gave birth to him. In Dio in the Dark, Hades is portrayed as one of many antagonists. His role in the story was a little confusing. It is hard to tell if it is Hades who kidnaps Zeus for the sake of a bargain he made with Apollo, or if it was Nyx, to prevent him from stopping the end of the world.

The structure of the story is similar to a murder mystery, revealing pieces of the story bit by bit making the reader want to read more. Asad has creatively recreated these stories and the reader can tell a lot of hard work and love was put into this novella. There’s no definitive antagonist and protagonist, though Dionysus is a strong contender for the role of protagonist. I would’ve liked for the story to have been longer so I could’ve learned more about the characters.

Dio in the Dark is a great short story that takes the reader on a mythical adventure.