The Treasure of Peril Island 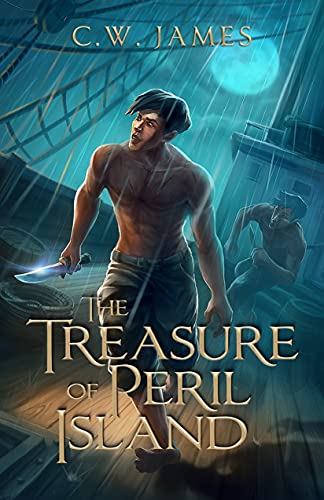 The Treasure of Peril Island by C.W. James is a thrilling tale of pirates and treasure. A young man named Jack, meets an old man who claims to be Black Juan Gaskara, the famous pirate who disappeared nearly 80 years ago. Jack, and his wealthy friend Hector, decode a message written by Gaskara while he was in a fugue state. On the run from murderous pirates, Jack leaves behind the girl he loves and embarks on a riveting adventure with Hector to find the mysterious island and treasure. They soon discover that gold is not the only secret Peril Island is hiding.

This exciting adventure story reminded me a little of Treasure Island by Robert Louis Stevenson as I began reading it. The essence of adventure and sense of intrigue is imbued in this thrilling story right from the beginning.

The characters are intriguing and easy to picture as they are detailed and well described, but I found Jack to be a sharp and particularly compelling character. Although the writer used some creative spelling during the dialogue to let the reader know which characters spoke with accents, the practice was not so frequent as to be overwhelming.

This is an enthralling pirate adventure story that I think would be great for young adult audiences, as the action comes quickly and rarely lets up, so readers will surely be engaged with this story. But this is also a good story for middle grade readers as well, as there is violence in the book but the blood thirsty pirates are not as ruthless or cutthroat as they might be in a novel geared towards adults. This lends this novel an enchanting Pirates of the Caribbean feel while still feeling unique.

The Treasure of Peril Island is a swashbuckling fantasy that is consistently entertaining. If you’re a reader looking for a quintessential pirate adventure story, then you’ll have plenty enjoy in C.W. James well crafted novel.