Thinking Your Way Out

A Most Unusual Friday Knight follows two orphans on a time traveling adventure to change the course of history. What was the inspiration for the setup to your story?

I am a big fan of time travel. It has always been my favorite sci-fi element, so it was very natural to think in those terms.

The other major source of inspiration was a close friend of mine, who was the model for the Shawn character (the inventor). He is the sort of guy who likes to tinker and take things apart, while also being a bit socially awkward. I was out biking with him one day and I said, “You know, I think I am going to write a story where you are a mad inventor who lives in a shed and invents a time machine”. He didn’t believe me. You can imagine his surprise when I handed him the finished book. Now, that said, the character evolved a lot during the writing of the story, so in the end he was quite different from my friend, but the initial spark did come from him.

Your characters were interesting and fun to follow. What were some driving ideals behind your character’s development?

I wanted to write a story where the adult-child role was reversed, i.e. where the children were forced to grow up and make the important decisions because the adult was simply incapable of doing so. So what we ended up with was a situation where it is the adult that keeps getting them into trouble or acts inappropriately, and the kids have to figure out how to get them out of their mess.

There were a number of key themes or lessons for kids that I wanted to include. Probably the most important would be doing the right thing even when it comes at a personal cost, which I think is something the world is in dire need of right now.

Another central concept is the idea of standing up to bullies (or in this case tyrants) – and not just with force, but by using your wits and thinking your way out of a problem.

Finally, I would mention being kind and accepting towards others even when they may be different or less capable than you are. That will be a theme that will certainly be at the core of all Shawn From the Shed books.

I am working on the next Shawn From the Shed book, which takes place in 1699 – the golden age of pirates. I was hoping to release it before the end of 2021, but it seems that it will be out in early 2022. I am also going to be releasing my first YA novel, a modern fantasy story titled “The Slayer, the Seer, and the Dream Stealer” in early 2022.

A Most Unusual Friday Knight 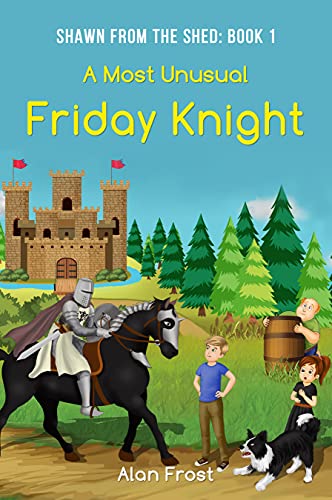 A Most Unusual Friday Knight by Alan Frost is the first instalment of the collection ‘Shawn From The Shed’ which follows the exciting adventures of the protagonist Shawn and his two companions Johnny and Ella. Shawn is an inventor experimenting in his shed when things go wrong and all three of them need to journey back in time to try to fix things.

This is an excellent children’s middle grade novel filled with both science fiction and fantasy as they travel through time to medieval England. Alan Frost is able to magically merge both genres in a riveting tale. The element I enjoyed the most was the underlying mystery of who brought these three unique characters together for their medieval quest, which is briefly touched upon at various intervals, and is definitely an engaging aspect as it leaves the reader wanting to know more.

The style of writing is perfect for a children’s middle grade story, and the metaphors used to describe certain elements of the story such as ‘The sound cut through the silence, like a shriek’ and ‘like lightning during a storm.’ Are simple but help the reader to fully imagine what is happening. It definitely speaks to a younger audience in this way. While I enjoyed the story, I felt there was not a lot of details on the background of the characters, but I am sure we will get to know a little more with each novel.

A Most Unusual Friday Knight by Alan Frost is wonderfully imaginative and certain parts reminded me a little of the story of Robin Hood but with science fiction elements incorporated into the fantasy tale. The story also ended in a way where it is introduces the start of the trios next adventure, this will definitely keep readers interested and keen to get their hands on the next instalment to be a part of the next expedition. This is an enchanting historical fiction story that will take young readers on a fun and exciting adventure through time.