Inspire the Reader to Explore

While I had written these Bible Stories a few years ago, as “August” laid out his experience with Christianity and specific churches, it seemed like a good way to introduce these stories which were not yet published. His passing these along to Tyler and his family seemed like the kind of thing August would want to do as they presented a deeper layer into his beliefs without trying to laboriously work them into the storyline. Of course, they standalone as a fictional work regardless whether someone has read, As the Daisies Bloom, though I am hopeful reading one will inspire the reader to explore the other.

This book explores different theological ideas. What were some ideas that were important for you to explore in this book?

Certainly, foremost in my mind was to show the long prophetic tradition which stood (stands) in contrast to the power structures. Too often the Bible stories are told in such a way as to whitewash the more controversial texts—while claiming some adherence of interpretation to “inerrancy.” Most of the Old Testament stories hit on one point or another in this regard. Many of the New Testament stories focus more on understanding Jesus’s teachings as coherent to a more non-gender-binary, peaceable ethos often emphasizing his encounters with women and how they did or might have responded.

What is one thing you feel most people overlook in the Bible stories?

Bits and pieces of the texts are told in such a way that they become romanticized, sentimental versions which may make for easy telling to children, but generally lead to adults who really have never learned to read the Bible in a deeper way. They become dependent on a few verses to uphold (and blindly defend) their beliefs or end up “leaving church” when the difficult passages challenge too much their rational mind. These ancient voices have much to say to us as relevant today as in the millennia past. It is my hope that August Kilber’s Stories for Tyler contributes in some small way to giving these voices life in our time. 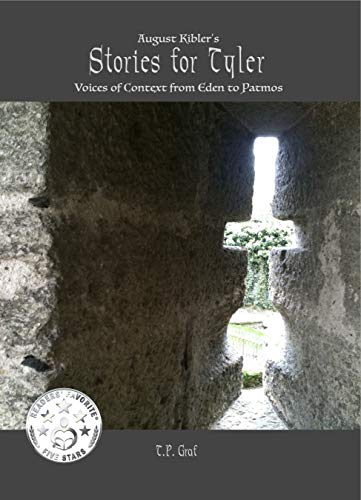 Have you ever wondered what it would be like to speak to someone from the bible or know their inner thoughts?  August Kibler’s Stories for Tyler, takes you on that journey. Covering a plethora of different areas and people, including Isaac, Ben, Miriam, and Paul, this book explores the perspective of each person portrayed in the bible. T.P. Graf dives into stories that are less known and not as recognized as other stories in the bible.

The book’s premise is quite unique and the author has done a fantastic job incorporating his thoughts in his writing. There are many readers and people interested in the bible that would enjoy a book like this, and I found myself reading through it reasonably quickly. Graf’s writing style was something I enjoyed and I loved how the author constructed the book to feel like a book of poetry. This story is thought-provoking and evokes a positive emotional connotation.

The author also covers contemporary issues and topics that we still face today. The book offers fresh ideas that others might not have considered as well through stories like the eunuch.  I found myself moving seamlessly from account to account without stopping. August Kibler’s Stories for Tyler is an absorbing Christian fiction novel that embraces classic literature to deliver a stimulating allegory of life.