Becoming a Woman of Substance follows a woman who struggles with past demons while obtaining her dreams in a tumultuous social and political world. What were some new ideas you wanted to introduce in this book that were different from Beguiled?

Racism, in 1930s-40s and now. Miriam’s relationship (and her son Aaron’s) with a person of color was circumscribed even more then than now, but we still bear the burden of segregation and racism.

Women’s role – public vs. private sphere. How married women with children balance their internal need to make a mark on the world vs. their responsibilities toward family.

What were some challenges you felt were important to defining Miriam’s character in this book?

I wanted to show Miriam’s gradual evolution from a self-centered young woman to a “Woman of Substance,” yet show her as a person who was not perfect, had lapses, especially when her needs were challenged.

She evolved from being ashamed of, burdened with the care of her handicapped daughter to one who came to love and cherish her as she aged.

As an ethnically Jewish woman, Miriam and her family had no religious affiliation. Therefore, she was not particularly identified with her heritage until the rise of the Nazis and recognition of the devastation of the Jews in Europe. She became active after WWII in sponsoring a family who had survived the concentration camps and worked with Jewish groups to help re resettlement of others.

Miriam took up the challenge of learning the reality of what it was like to be a black man in the 1930s, 40s and beyond via her relationship with Izy, who had been her colleague and then her life partner.

I wanted to focus on changing the valence of the energy in each scene: from positive to negative and vice versa. I wanted to leave each chapter with a challenge for the reader to continue to read. I wanted the main characters to be complex and psychologically sound.I wanted Miriam, especially, to be someone whom people could identify with, despite her foibles and weaknesses.

I am thinking of writing the next book about the 1950s HUAC and the Joe McCarthy era, but with a new set of characters. I don’t expect that will be completed for a couple of years.

Becoming a Woman of Substance 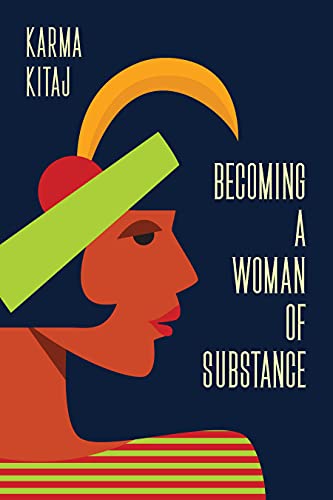 Becoming A Woman of Substance, by Karma Kitaj, is a riveting tale of bravery and passion. The story follows the journey of Miriam Butler, a woman who struggles with demons from the past, and also of obtaining her dreams while navigating the tumultuous social and political world. Set in the 1930-1940’s, Miriam experiences struggling through the Great Depression and the horrors of WWII and the Holocaust. Miriam has many interactions with people from all walks of life. It is from these interactions, both negative and positive, that shape Miriam and drive her to follow her heart and make a difference; even if the path is not one easily traveled.

Kitaj is a spectacular writer who does not shy away from hitting the hard topics. These topics include racism, sexism, and mental illness, which I find were handled expertly by providing viewpoints from all sides. Rather than preaching her thoughts on the topics, Kitaj uses interactions and dialogue to teach not only the main character, but also the audience, of how many people struggled during these times.

With her carefully crafted words, Kitaj was able to show that not all people experience prejudice the same way. Miriam was treated poorly due to her background, but upon hearing stories from others, came to see her situation in a different light and drove her to make a change. I really love this take on presenting these topics as it allows for an open discussion which is important when attempting to make a change. Kitaj drives home the point that throughout these difficult times, Miriam is able to persevere and really become rooted in herself and her beliefs, ultimately becoming a woman of substance.

Kitaj’s style of writing is clear and concise, which allow for there to be a focus on the plot and topics at hand. Although the chapters were a telling of Miriam’s story, the author does include Miriam’s and her husband Noel’s personal thoughts to be relayed through journal entries. I really appreciate this as it adds depth and brings the characters to life as they explore their inner thoughts and feelings.

Becoming a Woman of Substance is an amazing mix of historical and fictional characters, it feels as if I was reading the actual life story of a women from that timeframe. This book gave me new perspectives and a sense of pride as a woman.

Becoming a Woman of Substance, the sequel to Beguiled, finds Miriam Levine Butler at age 38, having had an epiphany. No longer could she mourn her lost years, dutifully taking care of her handicapped daughter Alice. No longer would she bear the dismissive attitude of her once adoring husband, Noel. No longer would she resort to unhealthy means of numbing herself. The Great Depression rages on and on in 1938. Her beloved son Aaron is in California trying to be a screenwriter. Her immigrant mother, who now owns a grocery store, advises her daughter to “get out and do something. Do you want to end up like I did when you were a child? A nothing?”

Miriam heeds Ma’s warning. She ventures out of her purgatory, goes back to her old haunt, Romany Marie’s café, where she hears about the Federal Theatre Project and its daunting director, Hallie Flanagan. This launches her new life as she returns to her early love of theater, but this time as a field investigator of drought victims in the growing fields of California.

This still beautiful and intelligent woman prospers on all fronts: finding engaging new work, friends, and a lover. Her early inclination to be self-absorbed, her desire to be a stage star all dissolve as she finds fulfillment in helping others, in expanding the circle of people she welcomes into her life. The backdrop of the Depression, WWII, and the Holocaust challenge Miriam’s equanimity, but she finds new strength within herself. Follow Miriam’s journey to becoming a woman of substance as she confronts her fears and self-doubt, untrustworthy people, racial prejudice, and losses of loved ones.