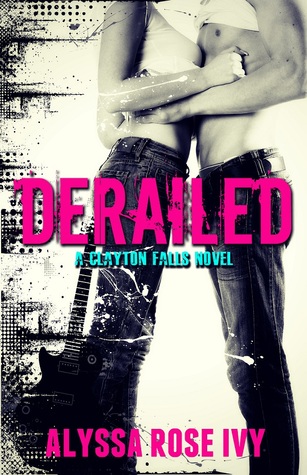 The Clayton Falls series by Alyssa Rose Ivy is a collection of three romantic books: Derailed, Veer, and Wrecked. All three books are set in the town of Clayton Falls, North Carolina, rooted in the lives of 20-something adults, most of whom grew up together. The first book, Derailed, introduces Molly Sander, a first-year law student who is struggling with the recent death of her fiancée, Adam. She leaves school to return to Clayton Falls for the summer, hoping to give herself time to heal. Her ex-boyfriend, Ben, is thrilled to see her, but her best friend Kelly is determined to set her up with Gavin, a police officer who works with Kelly’s husband. Molly wants to confront her fears and heal, but does she need the comfort of an old love or the excitement of someone new?

Veer focuses on Becca, Molly’s best friend from college. When Becca doesn’t get the summer internship at the Boston DA’s office, Molly helps her get a job with a local lawyer, and Becca comes to Clayton Falls for the summer. Molly is eager to introduce her to everyone and the single men begin to circle like sharks. Becca has more potential suitors than she wants, but one of the men from Clayton Falls turns out to be more than she expected, and they set out to pursue their dreams and lives together.

Wrecked picks up with Jake, Ben’s brother, drunk and fighting at a party. A DUI accident lands him in the hospital, and Emily, an ICU nurse, is attracted to him. He gets her number and asks her out, but when he discovers that she has a son, the date falls apart. Emily doesn’t want to see him again. While visiting her parents, her brother’s best friend Austen admits his longtime crush on her. Jake’s past and his drinking problem make her wary. Dating with a toddler in tow is going to be difficult, and Emily has a lot of choices to make.

Having all three of these novels in one volume is a great chance to immerse yourself in the lives of the characters. The Clayton Falls series is driven by the personalities and relationships of these lifelong friends, so following them through several years of their lives is a real treat. I’m sure you’ve heard of “cozy mysteries” but is “cozy romance” a thing? It should be, and this is a great example of that. Part of the appeal here is the small-town feel where almost everyone knows each other, and while they may move away, no one loses touch. This is both a safe harbor for some and a launching pad for others, and you’ll enjoy your visit there.

The author doesn’t shy away from real-life situations that everyone faces. The characters deal with tragic deaths, grief, and real-world situations like assault, addiction, and single motherhood. Since most of the main characters are just starting out in life, high-school crushes, loyalties, and disputes are still fresh, sometimes violently so. Since people are all up in everyone else’s business, keeping secrets is almost impossible, which can cause conflicts of its own. The author gives us a cast of unique, fully-realized characters with their own fears, hopes, and goals. She has a talent for dialogue, and by the end of the series, you’ll feel like you’ve known these people for years.

Though I’ve tried to avoid spoilers, my one criticism of the series is that it’s far too easy to see how these young romantics are going to pair off. The love triangle doesn’t quite connect on all three points, and sometimes feels forced. There are plenty of obstacles, though, with jealousy, behavior that seems stalker-ish, borderline sexual harassment, or actively trying to sabotage a relationship. The characters learn and grow throughout the books, using their high school and college experiences to emerge as adults ready to start lives, careers, and families of their own.

If you’re a fan of romantic stories with characters who feel so real that you’ll see yourself and your friends in them, you’ll enjoy the Clayton Falls series. Don’t miss the bonus chapter of an upcoming book at the end.