I Found My Escapes

The Guardian War Chronicles Vol I follows a brash truck stop intendant as she is unwillingly thrust into a game of cat and mouse with the fate of the universe in the balance. What was the inspiration for the setup to this exciting story?

I’ve always enjoyed the written word. It had been a dream of mine to write a book and tell a story my way, with my own voice. To be honest, and not intentionally confusing, “Vol II” had always been the first book in the series. Vol II (for now we’ll call it RISE) was edited, the artwork was in process, ready to publish, but something didn’t feel right. I was pleased with RISE and was told it was a fun read (staying in the vein of science fiction/action adventure) by my editors and beta readers, and I was ready to commit, but something was out of place.
That was… back in 2016.

The Surrender Game (the new Vol I) then became the backstory (an epic prologue), to what would become the rest of the series, continuing with RISE as Vol II. And the series title “The Guardian War Chronicles” came into existence.

I had a “what if” idea, and one day after work, I sat down at the computer and started putting the pieces together.

I come to the hard realization after RISE was completed, certain “items” needed more context and definition. The contents of the black backpack needed some explanation. Specific characters (even the “villains” perhaps) needed to be fleshed out a bit more. The Surrender Game became my outlet to unify all those things I believed were missing/lacking in the bigger story.

I’ve always been a huge fan of high energy, fast moving, quick pace, rapid-fire, snappy dialogue, action packed content, and never letting up for a second. I’m a child of the 80’s, a teen of the nineties, raised with Star Wars, Star Trek, adventure flicks, cop/buddy movies, and science fiction novels and comic books of the time, and in those make-believe places, I found my escapes. Those faraway locations in my imagination were what guided me to want to tell my own stories, generate my own characters and “bad guys” from the ground up, build places and make things, and create my own universe from scratch. Staying inside that lane I’m comfortable and familiar with. Always being myself.

I wrote these books initially for my own personal enjoyment. Writing has always been a hobby and a coping mechanism for me. I had never thought of publishing, until I was instructed by a trusted friend in the author community that I should publish my work.

I longed to write something in which the reader “wants” to turn the page, read every line, and itch to read the line after, and be curious to what happens next. I wanted to write a story “I” could read and get lost in. I wanted to create something that doesn’t let up, has the appropriate cliffhanger moments, and has that same high energy I enjoy. Even those areas where the story slows down momentarily, are not slow for very long. I desired a certain uniqueness with different characters, a level of fun, mysteriousness, excitement, on edge, gritty, with a mystical/mythological/fantasy quality. Sticking with what I know.

Liberty Bell is an intriguing and well-developed character. What were some driving ideals behind her character development?

I’ve always been of the belief that we are all products of our environment, and life experiences. Who we are, what we’ve become, is an amalgamation of everything we have been through, and experienced personally throughout our lifetime, good or bad, up to this exact moment in time. When High Intendant Liberty Bell was in early stages of character creation, (believe-it-or-not), she was the anthesis, mirror opposite, to the character you’re familiar with, today.

She was in her late twenties, sweet, loving, caring, yet stern with her subordinates when necessary, but kind to all she interacts with… giving, selfless. Prim and proper. Dressed to the nines. Immaculate quarters. Decorative/pretty surroundings. Always willing to do the right thing. Stepping on no one to get ahead in life.

One night while working on her back story development I had a moment where I said to myself, “Nope. The High Intendant of Truckstop One, Liberty Bell, is not the sweet, “southern belle,” bed-and-breakfast owner, accommodating rig pilots and local truckers with a gracious attitude; always smiling and pleasant to be around.

It had to be the opposite. Her life experiences, environment, early teenage trauma, those “Markena” encounters, the routine and reality of her lifestyle, the dangerous unpredictable setting within the walls of her Truckstop, mixed with the isolation and permanency of being a fueling station owner/operator, her shady “friends” and colleagues of the industry, the stress, would eventually mold her into something a bit more hard, forthright, no-nonsense, brash, and perhaps a bit self-centered. Tyreel would say to her, “we’ll create an empire in Truckstop One, Liberty. Trust me. But to create an empire, one needs to think like an emperor.”

Tyreel had a large role to play in her development as well. She was forced to rely on his expertise and advice in the early years. She had to trust him and believe what he said was true. With Tyreel’s daily influence, the ongoing training, being that little voice always whispering in her ear, helping Liberty find that respect and level of success she so desperately wanted; Tyreel played a large part in her growth over the span of thirty (backstory) years. She became a product of her environment. She became “honest”.

What were some themes you wanted to focus on in this book?

I do believe the “good versus evil” dynamic is an obvious prevalent theme throughout the novel, however, I wanted to wiggle free from the stereotypical hero(s) versus villain(s) concept and play around with the idea of, “what if those lines of good and evil are not clearly defined? What if the villain is right? What if ‘doing the right thing’ is vague, and doing the wrong thing for all the right reasons could be a foggy area, difficult to navigate? I wanted to explore that area of thought and the repercussions of those choices made.

Which then led into some of the other themes I enjoyed exploring: Love, friendship, sacrifice. How would we react and respond to certain situations, and how far are we willing to go? Is there truly a gray area regarding ethics? Are my characters willing to cross that line, and if so, what is the outcome or potential outcome? What is the villain capable of? Is there really such a thing as a no-win scenario? What could happen if the rules of the game are always in flux and open to interpretation? Is there really an “at all costs” mentality? I’m hoping I pulled that off with the Surrender Game. I’d like to believe Liberty navigated those paradoxes and self-discoveries in the only way she knows how.

This is volume one in The Guardian War series. What can readers expect in volume II?

I included the first chapter of Vol II, at the end of the Surrender Game, to allow a glimpse into what could happen next or where the story potential could possibly lead in the future. Allowing some room for reader imagination (while waiting for its release, stay tuned) and hoping the reader desires to remain in my universe to find out what happens next. The overall story, over the span of the series, is quite large and all ends need a beginning. Vol II splays out the foundation to how the story will be told moving forward. Vol II is the true beginning to the grand tale. Keeping with the same pace and action as the Surrender Game.

The Surrender Game ends, in what some have described as a bit “uncomfortable”, “a gasper” and that was the intention. Vol II provides some breathing room after the uncomfortable gasper and takes the reader elsewhere for a time, but never deviating from the storyline.

Readers can expect more action, more unique characters, science fiction content, twists and turns, and maybe some of those mystical, mythological fantasy type facets of the story, will begin to take shape. 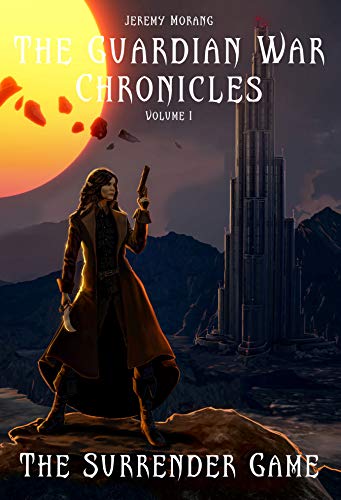