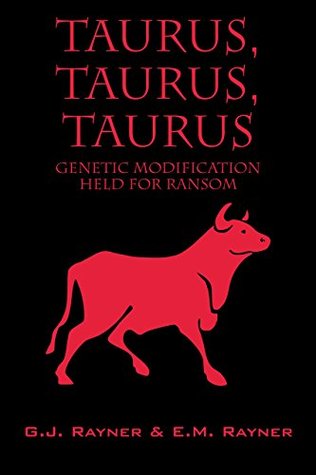 A sterilization syrum is being inserted into genetically modified super bulls, threatening to hurt the profits of the beef industry. Semi-retired, former Special Forces bad-ass Joe Garner is hired by a private security firm to track down the culprits, a cell of Islamic terrorists, and to take them out by whatever means necessary. Joe and his crew of ex-military tough guys track down the scientist who created the syrum, all the while getting in plenty of gunfights with Jihadists. In the end, they team up with a Russian General, with whom Joe has a history, and together, they take down the Imam, and restore the scientist to the cattle industry.

The 2016 Presidential election has made it very clear that there are two United States of America existing simultaneously: the coastal, liberal thinking, urban populous, and its white male dominated conservative counterpart. Taurus, Taurus, Taurus, a novel by Gordon Rayner, will appeal to the latter. It is chock full of espionage tech, a litany of government organizations bumbling through red tape towards a collective goal, descriptions of guns, and derogatory terms for people of Middle Eastern descent. America, fuck yeah!

Most of the book follows the protagonist, Joe Garner, a former special ops tough guy extraordinaire with too much integrity to toe the company line, who goes to work for a private black ops security company. (Bruce Willis could play him in the film). Joe’s got a bad leg, drinks a lot, and makes frequent mention of other men’s cowboy boots. Joe’s wife is also some kind of operative who goes on “spooky wooky missions,” though her character is for the most part left unexplored. In one of the least plot related, and kinkiest scenes in the book, Joe and his wife go to Jamaica, get “ganja” from the “tall black porter,” and then they end up back in the hotel room with his wife dabbing cannabis syrup on her nipples?! The sexy talk doesn’t stop there. There is a physical therapist who reads porno mags at his desk, and at some point the operatives are implanted with scrotum tracking chips.

Not surprisingly, this book is about sperm. In a meeting with a client, Joe discovers that a big beef conglomerate based in Houston is the top provider for cattle worldwide, and has developed a “dream sperm machine.” But, the plant where the super sperm was being developed has been blown sky high. Years later, a mysterious ransom note appears from the dream sperm’s creator, Dr. Gambil, who turns out is in cahoots with terrorists from Kyrgyzstan, setting the plot in motion.

Joe and his highly paid team of former special ops trained killer-cowboys travel around the globe chasing down the doctor and the Jihadists. From New Jersey to Argentina to Kyrgyzstan, Joe and his guys are always one step ahead of the Islamic Brigade, whose attempts to sterilize the super bulls continue to be halted by American bullets. They win every battle in overwhelming fashion.

In one section, Joe and his guys realize that since they are a private organization, the Geneva Convention can be disregarded. They discuss the best ways to torture an Islamic militant, including making him watch a pig get slaughtered and then covering him in its entrails, and having a naked woman attack him.

This book is for meat eating, red-blooded, cowboy boot wearing country boys. Fans of John Le Carre and Robert Ludlum will enjoy the way these all American heroes kick tons of ass.