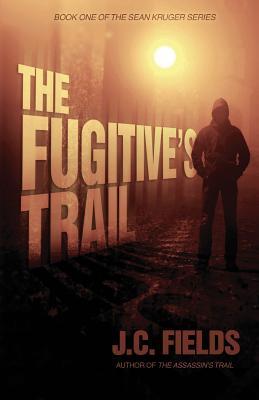 Suspense, intrigue and subterfuge. An agent chasing a fugitive who knows more than is healthy for him. What begins as a cat-and-mouse game evolves into a spectacle that is sure to entertain all readers. The Fugitive’s Trail by J.C. Fields appears to be the first book in a series centering on the skills of Special FBI Agent Sean Kruger. His son now off to college we meet Kruger as he sells his home and moves into a condo where he hopes to just relax and quietly move about his business. Relaxation is not so easily found for our agent. No sooner does Kruger make a romantic connection with his attractive neighbor than he is pulled into a man-hunt. Will Kruger catch this so-called fugitive and bring him to justice? Or is the thought of justice much more subjective than previously thought?

For a debut novel this is a fantastic piece of work. Any reader can tell that a lot of time and effort went into crafting this adventure. Fields has done his research in this area of crime fiction and it all feels quite realistic. Understanding how major organizations like the FBI, CIA or even the local police department work can be a daunting task for a new writer. Fields is clearly comfortable with this topic and has either studied or done enough research to become so. What’s unsettling with this genre is the matter of how loose-lipped certain agents can be when they are in the comfort of their home with their significant other.

Fields does a great job describing the scenery, particular points of interest and characters in general. The main characters in this particular book have their back stories fleshed out under the pretense of first-dates. Instead of feeling forced, this is a natural stage for such information to be shared. A clever trick indeed.

If there are any drawbacks it would be when Fields describes the race of a character. Using such phrases as ‘the black guy’, ‘the white guy’, or the ‘girl of Asian descent’ seems rather bland in comparison to how he describes other aspects of the book. Opportunities to describe a characters skin tone with more grace are missed here and it grates hard to read such a stereotypical and flat profile. Other parts of the character are described with more elegance which is what makes this particular aspect stand out.

If you are looking for an adventurous crime-drama where the elements of surprise and intrigue hide around the corner then The Fugitive’s Trail by J.C. Fields is a must-read. Quick-paced with easy to digest chapters and interesting characters you can’t go wrong by adding this to your collection. Besides, aren’t you curious to see just what happens when Kruger does catch the fugitive? The delectable twist shouldn’t be missed.