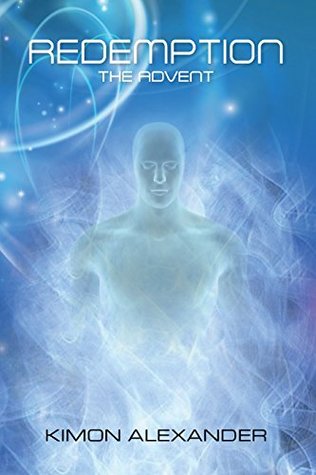 Redemption: The Advent by Kimon Alexander is a fantastical sci-fi-thriller. Set during present day, police investigator James Baxter becomes host to a Valdor, an ethereal being from a parallel universe. The Valdorians have watched Earth and deemed humanity too far gone to achieve spiritual evolution. What the Valdor decide is to offer humanity one more chance and send one of their own, Balthazar, who ends up in Baxter. Balthazar not only has to convince Baxter to help him, but to also complete his mission and through their combined abilities they combat a drug lord with a mind-controlling micro-chip and an Islamic extremist bent on world domination. All of this coming to a rocking conclusion that sheds light on the very nature of humanity.

The immense project that Alexander has chosen to write on is incredible. He wishes to dig into the depths of humanity and fish for the largest pearls of wisdom that he can yield to the reader. His intentions are clear that he is seeking this with optimism because each chapter holds an inspirational quote from various figures of history. His optimism is in spite of the ruthless characters that his two joined protagonists confront.  In some ways, the narrative feels a bit indulgent of the author’s own ideals that bleed too much into the story, but for all intents and purposes the book rings true and is a welcome change from the cynicism of our modern day.

The novel presents itself as science fiction upon the opening scene. The Valdorian meeting bespeaks of space fantasy as the ethereal beings conclude that Earth might be saved, but that is a slim hope. It then jumps into the thriller genre with drops of science fiction and psychological drama as Baxter grapples with being a host to an inter-dimensional being, but also the last hope for humanity to redeem itself. Some passages become almost too weighted down by the philosophy and thoughts that fill the pages and it works against Alexander’s pacing as he attempts to make the work a thriller.

By the end, Alexander leaves the reader wanting more and leaves the story open for another book. There is so much that happens in this book that it can easily span two novels and still spend just as much time navigating the armchair philosophy he appears to enjoy.

Any reader who enjoys a sci-fi thriller with a parallel dimension backdrop would do well to read this work. Even thriller lovers would enjoy this book if they can get past some of the intellectual heavy lifting Alexander weaves in. True cerebral readers will enjoy this book and relish the mental corridors that Redemption leads us down.