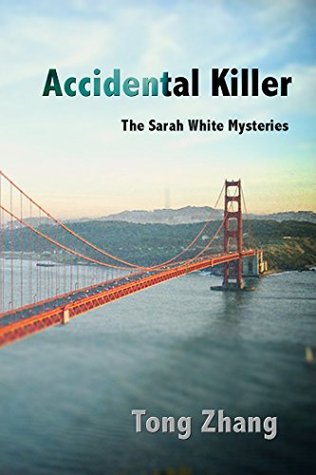 A good mystery novel is one that will challenge the reader, misdirect suspicion, and keep the reader turning the page to find the next twist to see if they were right.  Accidental Killer by Tong Zhang meets all these requirements, as well as throws in some Chinese Mob style twists. The main character, Sarah, is a bright mid twenties writer that also has a degree in programing and seams to draw out the good in people. The book is filled with technology references and science information but this does not impact the reader’s ability to grasp what is going on even if they don’t understand the technology being discussed.  There is a small amount of romance in the book that adds to character development rather than being the center of the plot.

This is a contemporary story that takes place in California’s Silicon Valley area, with some outskirt resorts and the mountains of Tahoe. One of the key plot points is on nanotechnology, but the author does not go so in-depth into the science that the average reader will be lost. The same goes for the genetics discussion that some of the characters have. What is nice about this novel is the strong female protagonist. Sarah is not a fluff character, and she is very relatable. She talks about finding balance between traveling the path that was expected of her, computer science/programing, and her passion, writing. She over comes personal tragedies of being left by her mother and later her aunt that raised. We learn a lot about many of the characters through their interaction with Sarah, she is able to bring out their best sides and show the readers passion rather than just flat characters that move the plot forward. Hardly any character brought into the novel is fluff. This is important because it means that Zhang is writing with a purpose and not just trying to fill the book up with pages on pages of meaningless content.

Accidental Killer starts as if you’re stepping into someone’s life as a spectator. There is no preposition so (without spoiling things) the beginning of the story is confusing, but becomes clear a chapter in and the realization of what is really going on is magnificent. Several other characters are mentioned as well with no clue as to who they are or where they fit in, Scotty, Ramsey and Mr. Bash being a few. You will eventually learn who they are and how they fit into Sarah’s life but it takes times. While confusing, it does add to the mystery aspect of the novel; who are these people and what are their stories. If you can stick with the writing through the first two chapters you will be engrossed and unable to put the book down. There are definitely some memorable characters that I can see making a repeat appearance if Zhang continues the series, namely Jake and Madam Wu. Both are left with the impression they have more stories to tell. Overall a good mystery novel, quick read, and entertaining characters.