Into a World of Darkness

I Am The Sand follows the harrowing story of a young woman held in captivity and her daring escape. What was the inspiration for the setup to this thrilling story?

The inspiration for the story came about after reading so much about the entitlement and the ‘humiliated rage’ of men in our patriarchal societies, sometimes resulting in familicide, and the abuse of children in the Catholic Church as exposed through the commissions of Inquiry around the world recently. I imagined Chloe being held by a man who had experienced dreadful abuse in his own childhood and this ran parallel with the abuse and trauma he was visiting upon Chloe at the same time. It’s an interesting juxtaposition.

Chloe is an intriguing and well developed character. What were some driving ideals behind her character development?

Chloe’s character grew organically from the time that I envisaged a 16-year-old girl held captive in the cellar of the ‘monster’. And her background is so normal in contrast to that of her abductor. She goes to school, she sees her friends, she has a boyfriend and a very stable family background yet she is suddenly and violently plucked out of that and thrust into a world of darkness. She now begins to show her resilience and her strength of character which is quite amazing. She develops an ingenious plot to escape from a man she knows is unhinged and is about to kill her.

The very strong themes around which this book is written are the effects of PTSD, childhood trauma and abuse. We are starting to have very meaningful conversations in society about these widespread and long-lasting effects which have been described as the number one health threat in Western society, because not only are the effects psychological, but they are also physical.

The next book is a sequel to this because of the type of ending I AM THE SAND has – I want to follow a couple of the characters through into another narrative. I am not sure when it will be ready – but I hope before too long!

I Am The Sand 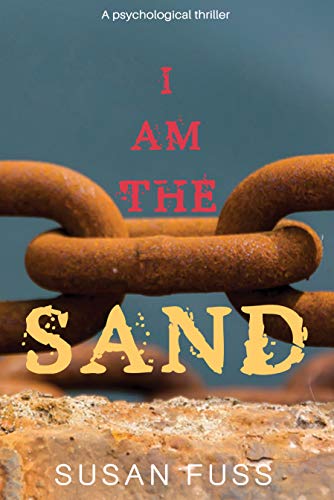 I Am The Sand by Susan Fuss is an intense psychological thriller following a girl named Chloe who has to muster the courage to escape from her deranged captor with an audacious plan.

Author Susan Fuss has created a uniquely intriguing character with Chloe. I appreciated the slow evolution and progression of her character throughout the book. She is definitely a fighter and had a strength that felt authentic because it grew organically throughout the story. I cheered for her throughout the story and was biting my nails for some of the more provocative scenes. Her struggle to hand onto her sanity through her captivation was one of the more humanizing aspects of the novel that allowed the story to explore the human condition through a unique perspective. This novel got me thinking that sometimes we are pawns, in life, in relationships, and we don’t even know it. This book also made me appreciate how resilient people can be in the face of adversity.

This is a captivating psychological thriller about the will and strength to survive. This is a fast paced character driven novel that delves into the roles of both captor and captive in some thought-provoking ways. The story can sometimes be devastatingly bleak, but what do you expect when you’re held captive by such a monster.

I Am The Sand is a roller-coaster of emotions. The story is consistently compelling and I really enjoyed the ending of the book. Author Susan Fuss has written a book that will shock you and keep you glued to every page.