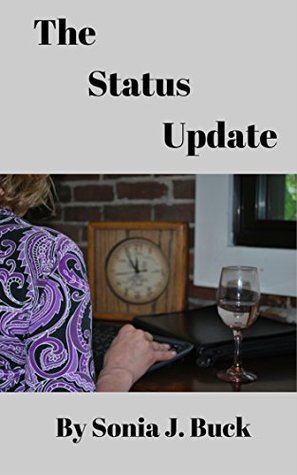 Ever wonder what would happen if you made just one different decision?  The Status Update by Sonia Buck examines the power inherent in just one choice. Christine Reed supports herself and her three children. Her twins, Brian and Brenda, are seniors in high school, and Samantha, her surprise child, is eight. Although Christine wants to keep her children safe and close to home, she allows the twins to attend a college party on New Year’s Eve, believing there is little harm because they are good kids. The repercussions of that night haunt Christine and her family until a miracle occurs through an unlikely source: a defunct Facebook account on an outdated computer. Christine gets to experience the ripple effect of that one decision and the gift of changing it.

Buck focuses on themes that resonate with many readers: choice and grief. Everyone wishes for an undo button in life, but only hindsight can reveal the choices that mattered. Christine and Brian Reed spend ten years of their lives wishing they could go back in time and change the one night that ruined everything. Brian’s alcoholism and Christine’s refusal to treat an illness force them to live in a world of pain, punishing themselves. Both Brian and Christine succumb to their own grief in destructive ways. Anyone with loss or regret can relate to these two characters. Then there is a moment of magic that allows Christine to alter her past and future, and who wouldn’t want that?

The Status Update follows a familiar path but with new twists. A magical moment gives Christine a second chance, and social media is the impetus for this change. The new approach piques the interest and pushes the reader to keep going until the end where Buck unpacks some surprises.

While the plot keeps readers engaged, I felt the character descriptions were doled out mechanically through second hand accounts rather than organically. There is a lovely scene in which Brenda is able to help her younger more analytical sister understand the magic of a fairy tale. The interaction between the two characters felt like a genuine moment, but there were too few of these experiences. I felt I was being told who a character is rather than being shown.

Sonia Buck has a way of leaving tantalizing bread crumbs throughout the story that lead to an entertaining ending. I would say the pacing of the novel was spot on except for one spot; the event that allows Christine to alter her choice and her future is told twice: once as it happens and again as part of a journal entry. This time could have been spent with more anecdotal accounts that make readers fall in love with the amazing characters Sonia Buck has created.

Overall, The Status Update by Sonia Buck is a fun read and is an enjoyable way to pass the time.