Fractured: My Journey Back From Death and the Lessons I’ve Learned Along The Way 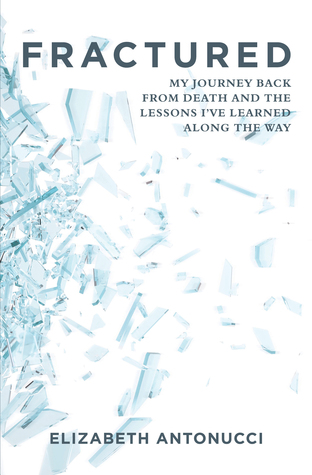 Elizabeth Antonucci’s Fractured details the author’s own revelations and strides toward bettering herself both mentally and physically. Her idea for the book stems from a car accident which cost her dear friend his life and almost took her own. Antonucci, a successful entrepreneur in the world of theater, begins her story with details of the car accident and the ensuing trauma that brought her closer to those around her. Throughout the book, Antonucci touches on several intensely personal events from her teen through young adult years which ultimately helped her evolve into a young woman who has learned to find peace, satisfaction, and happiness within herself.

Elizabeth Antonucci’s life seems equally filled with tragedy and victories. For every horrific experience she has had, she has been able to triumph. The basis for her book, the accident which took her friend David’s life and so greatly altered her own, draws the reader in during the first chapter. Antonucci has done a wonderful job of engaging the reader in a conversational style of writing and is straightforward with her descriptions of the accident, her recovery, and the therapy that followed.

The writing of Fractured itself appears to have been a type of therapy for the author. As I read, I could feel the cathartic effect it had on Antonucci. She gave herself many permissions, and, as she says, she “spoke her truth.” Antonucci reveals a past riddled with body dysmorphia and a life-long struggle to find her own voice. As a young woman making her way successfully as an actress and entrepreneur, she spends many years finding it easier to be others than to be herself.

As a mother and a woman who battled anorexia in her teens, I thoroughly appreciated Antonucci’s candor regarding her addiction to diet pills and the long uphill battle she faced tearing herself from them. There is no sugar-coating the impact dieting had on her both mentally and physically. She clearly expresses her hope that her words will find their way into the hearts of her readers. I believe she has more than accomplished her goal.

Romantic relationships are yet another area about which the author bares her soul. More men and women than we would all care to admit are involved in emotionally abusive relationships. Antonucci was one of those women. Remaining attached to a boyfriend who controlled her every move changed the dynamic she had with her own family and, ultimately, changed her as a person. She relates a genuine account of how she overcame that obstacle with her father’s gentle words and guidance.

It is difficult to find anything lacking in the author’s personal account of her life-changing events. The introduction was powerful, the conclusion drives home each point Antonucci strives to make throughout the retelling of her life and the many revelations she has had. Her chosen style of writing makes this an easy recommended read for anyone who finds him or herself faltering on the road of self-discovery.