The Ice Factory follows hurricane victims as one struggles to get the only ice factory working again. The premise seems simple, but what ensues is a fun and engaging story. What was your inspiration for this story?

They say fact is stranger than fiction, the book is actually inspired by a true story, which was cruel, ironic and hilarious. I started writing after watching a documentary about a caribbean hurricane, which seemed a perfect metaphor for personal upheaval and survival.

I loved reading the differences and similarities between the way Joy and Audrey viewed the world. What were some themes you wanted to capture when writing their characters?

Joy represented old fashioned decency & dignity (values which i remember from the caribbean, especially of my grandparent’s generation).
Audrey shared the same values at heart, but surrendered her heart to a husband who slowly eroded those values over thirty years. just when all seems lost, with a little encouragement from those who saw the best in her, in rebuilding the ice factory audrey was able to rebuild herself.

The Ice Factory is your debut novel. What were some things you wanted to accomplish as a writer in this book, and what were some lessons learned?

I really had no expectations other than bringing out all the colourful eccentricity of caribbean characters, and seeing where that would lead. My characters became so vivid that I couldn’t wait to see what they would do next, and all I had to do was type what they revealed. The publishing experience, however, was a steep learning curve, the biggest lesson… never submit a final draft until you’re absolutely certain it’s FINAL, and confident enough to let go completely. There’s nothing worse than discovering a mistake after the book is published.

I am working on an Australian epic set in the nullarbor desert, again inspired by a true story. The working title is ‘terra nulla’, which I hope to publish in 2018… fingers crossed! 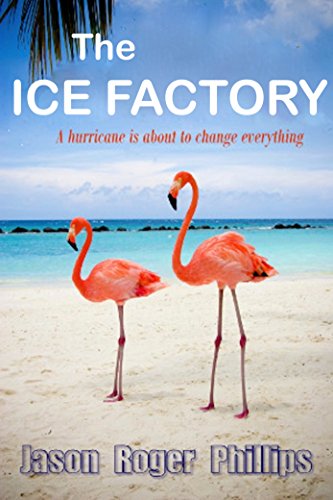 When Audrey woke up on the kitchen floor, she didn’t expect to find herself in the news. But there she was, for all the wrong reasons, and now it seemed all of Trinidad & Tobago was laughing at her. By divine intervention, her path leads to the neighbouring island of Grenada – once a jewel of the Caribbean, the tiny nation faces its darkest hour in the aftermath of Hurricane Edna. The natives are restless: having no electricity, no homes, plenty of heat and no ice for their grog. Audrey is about to face the biggest challenge of her life, as the new owner of the Ice Factory.