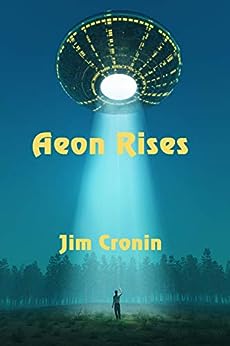 Justin Madrid, in Aeon Rises, is a teenager, unhappy with how he is fitting in with his peers. The problem? He is not fitting in with his peers. He is weird and different than most of the other teens around him. He cannot play video games without getting blinding migraines. He also can’t be on anything electronic. He does have one good friend, Kevin. He spends most of his time trying to get his mom to give him a ride to school instead of making him ride the bus. Oh, and he really wants a smartphone so the other kids will stop making fun of him. Sounds pretty typical, right? Well, the book takes a whole other direction almost immediately.

Jim Cronin creates a different, fun world in this engaging book. Justin soon learns that he is not at all who he thought he was. He also learns that all is not as it appears in his small town. For instance, there are aliens running the library (an idea most kids could probably buy). The Skutarans, led by bad guy Keldon Ankara, at the library immediately see Justin as a threat and the adventure begins. Justin’s uncle, Jonah, knows all of the information that has been kept from Justin. He takes over with Justin and opens up a whole new world for him. With all of the new information, it is now up to Justin to save Earth from the Skutarans.

I enjoyed this book from the first chapter. I was immediately pulled into the story. The main characters are all teenagers, but I don’t think that affects who would enjoy the book. I think I enjoyed it as much as my teens would. Aliens play a huge part in the book. That aspect of it was very entertaining. I enjoyed reading about earthlings through the eyes of the aliens.  It is very well written.

Along the way, Justin and his friend Kevin team up with an otherworldly girl named Myah. One of the best parts of the book is the way Justin and Kevin communicate in movie quotes, a fact that drives Myah crazy at first. It all evolves in a fun way though.

I would recommend this book to anyone, adult or child, science fiction lover or not. It was fast-paced and exciting. Despite it being science fiction, it was written in such a way that it almost seemed believable. I found myself reading it without having to suspend my disbelief. I also found myself thinking that the story would make a great movie. I liked the three young characters in the same way I liked the characters in Harry Potter when I first read that book. I highly recommend it.