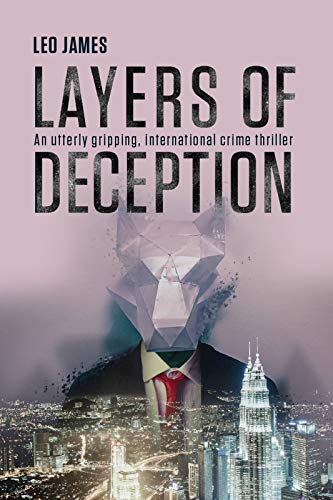 An international crime thriller guaranteed to keep you reading to the last page. Layers of Deception chronicles the life of Steve Roussos as he struggles to land a business deal for his IT company all while pressured with the financial hardships at home. With the company based in England Steve and his team fly out to Malaysia in hopes of securing a contract with a high-profile company in Asia. The authors’ knowledge of Kuala Lumpur with its modern skylines, expensive taste, seedy underground dealings, and masked corruption makes a perfect backdrop to this edge of your seat adventure.

One of the biggest draws for the book was its setting. Having spent some time in Kuala Lumpur it is not unfathomable that something of this story would happen there. Even a reader who hasn’t a clue about the city can easily illustrate a picture from James’ writing. Unlike the solid set up of the stories location, the characters had their lackluster moments. It took a while to distinguish the different personalities between each character. With so many people popping in and out it was hard to keep track of who was who, but the main character Steve is likable. I enjoyed the mystery and intrigue behind the villains, and enjoyed trying to piece together who was who.

In the first half of the book, my eyes were glued to the page wondering what would happen next. Despite the initial disorder of characters, the author writes a fluid sequence of events which gives the reader enough time to process the information and keep the story moving. It was only towards the latter half of the book that I thought there was too much repetition of dialog, with over explanations, and random facts. However, where the authors’ descriptions do shine are that of the technology and software mechanics within the story. As someone who is so far outside the realm of understanding cyber-security, I never felt lost or confused. In fact, I was frequently intrigued and curious for more information on the topic.

I love a good crime thriller and this story met all the requirements. Layers of Deceptions is an enthralling escapade full of danger, crooked characters and criminal activity on a worldwide scale. A book I suggest any reader with a taste for modern crime novels to pick up.