Son of the Serpent 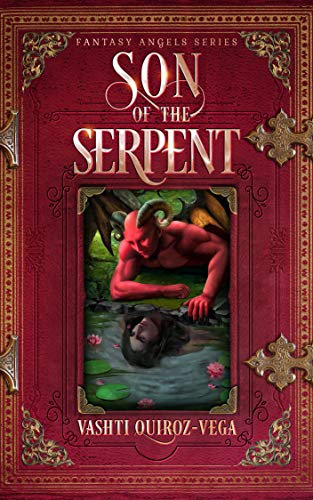 Son of the Serpent by Vashti Quiroz-Vega is a fantasy novel of vengeance and revenge told from the dual perspective of Dracul, the Son of the serpent, and Lillith, his mother.

Dracul arises in a cave and discovers that he’s encased in a demonic body. He’s filled with agony and confusion as he pieces together his memories to determine how he arrived there. In a painful and shocking epiphany, he realizes that he is the son of Lilith, and that Lilith had tried to kill him. He vows to find out what happened and avenge himself. On this bloodthirsty journey, he faces death, destruction, and betrayal. People, encounters, and events further cement his determination for revenge. The author breathes new life into a host of fantastical characters, often from Biblical settings. Their lives and stories are familiar, yet enshrouded in darkness.

What I found most striking about the book was the depth of its darkness and morbidity. Vivid, gory scenes of slaughter left me uncomfortable, but totally engrossed. Lilith’s sections were almost unbearable. Scenes of Lilith’s cruelty towards others was always accompanied by a fascinating glimpse into her psyche. There’s a lot going on in her and just a surface glimpse was enough to leave me mesmerized. It’s been a while since I encountered such a well-portrayed and dislikable antagonist.

Dracul was just as well-written. His struggle to be good in the face of his own destiny was oddly inspiring. To fight where he came from, to whom he belongs, and the core of his being- his pain and loneliness were palpable. The ending was unexpected, but upon consideration, entirely perfect. Maybe it’s not inherent to him, but it’s clear that Dracul is a good creature.

The Biblical settings and references provided a whole new perspective on the worn-out stories. From angels to Cain and Abel, the otherworldly features heavily in this book- and not always in a favorable light. The Biblical events portrayed from a first-person and real-time perspective were super imaginative. I think it would be difficult to assign a genre to this book. Although it is set primarily in a fantasy world, the dashes of horror, romance, and the occult would make it an interesting read for nearly anyone. The world created by Vashti Quiroz-Vega is totally immersive. I was glad for the escape from reality and I would definitely visit again.