The Underground follows a wolf pack alpha male in an alternate Seattle who seeks the downfall of his overlord. What was the inspiration for the setup to this intriguing story?

The Underground was inspired by a single question I asked myself while in a half-fainted state on an uptown city bus with no air conditioning on one oppressively hot and humid afternoon: What would it take for a werewolf to survive in today’s world?

It gave me a lot to think about. Assuming humans are just as hostile to paranormals as they are in the literature, our werewolf’s primary concern would be keeping his true nature secret. Still, he can’t just wall himself away from humans—he needs a job, a place to live, and what have you. Would he have friends, knowing that everyone who crosses your path is a potential enemy? What lies would he have to tell to keep humans from finding out what he is? When the change comes, what does he do? He can’t go hunting humans in the city—that would be suicide. So…what? Those questions are just the tip of the iceberg, as they say.

Parker and Kurt were both well developed and interesting characters. Who was your favorite character to write for?

I really don’t have a favorite between the two. I love all my children equally! What was most interesting about writing the two is how they developed into such different characters. Yes, Parker’s from a rural-esqe part of the southern U.S. and Kurt’s a German aristocrat but it’s not just that. For example, their speech patterns are so different, aside from Parker being a potty-mouth! There’s a formality to Kurt’s speech that’s absent from Parker’s and everyone else. It’s almost as if I don’t have to use dialogue tags or other indicators as to who’s speaking. You can tell when Kurt’s speaking just from his language.

I loved the idea of exotics and the whole world of paranormal creatures you’ve built. What were some themes you wanted to explore in your world?

While mentally building the world for The Underground, I realized that world is our own. Human bigotry against paranormals abounds. Paranormals are hunted by humans and marked for execution. That’s no different than anyone who’s persecuted because of skin color, religious beliefs, sexual orientation or identity, or any other difference the majority perceives as dangerous and undesirable. That leads to the question of what would happen if the downtrodden decide they’re not going to take their lot anymore? History tells us the answer. Oppress a people long and hard enough, they will rise up. And the results won’t be pretty. There’s so much more to these themes, too. I’ve even written an essay about it.

Are you still working on the Sequel to the The Moreva of Astoreth? How is that coming along?

Yes, The Moreva of Astoreth’s sequel, When Gods Die, is still in the works. Since Moreva was released, I’ve been assaulted by major real-life issues that necessitated putting Gods on the back-burner. Moreva is getting a major overhaul—new cover and a deep edit—and once that’s finished, I can go back to Gods. Of course, I can’t say for certain when it’ll be finished. Deadlines and me really don’t mix. But the plan is to have Gods published by the end of summer 2020. One reason for taking so long is I have to write a novella, The Final Victim, which I’ve promised to people who sign up for my newsletter. Victim is set in The Underground’s world and bears a strong relation to it but it’s not a part of The Underground’s story. Call it a companion book. 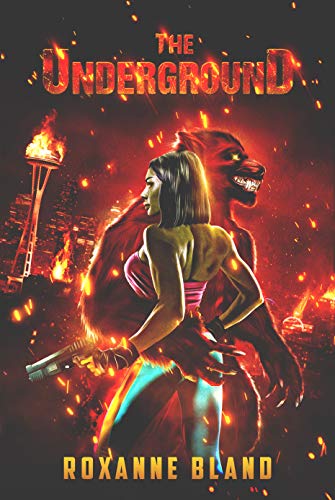 In an alternate Seattle, communities of “exotics”—shapeshifters, witches, elves and vampires—live among the murderous human population and are ruled over by the cruel vampire Master, Kurt. The powerful alpha male of the werewolf pack, Parker Berenson, is one of the Master’s enslaved servants and he would like nothing more than to hasten the downfall of the vampire overlord who stole his love, the beautiful mage Garrett Larkin. But in a night city already on the razor’s edge—in the midst of a spate of bloody murders—Parker’s passionate encounter with a stunning interstellar assassin could upset the very delicate balance and ignite a war neither exotics nor humans can survive.