KILLING YOUR BEST FRIEND: The Mystery of Psyche and Hidden Romance 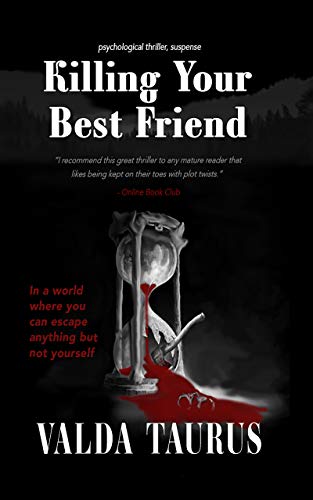 Killing Your Best Friend by Valda Taurus is a thrilling murder-mystery set amid the rich backdrop of the Alaskan wilderness. Set in a rustic and remote small town – the type of place where everyone knows everyone’s business and residents befriend each other not wholly by choice, but by lack of alternatives for companionship. Ivan Kortnev is murdered in grisly fashion, with a screwdriver to the heart, and his best friend Alexander Gray, an ex-convict who spent a decade in prison for murder, is convicted despite his inability to recall events of the night. Detective Andy Mohr is convinced, even with lack of material evidence, that Gray is wrongfully convicted. Led by his unwavering and stubborn sense of justice, Mohr embarks on a journey to weave through the entanglements and secrets of Cantwell’s residents to uncover the truth about Kortnev’s suspicious death.

Detective Mohr is arguably the most dynamic character in the book. He is a clear protagonist, fulfilling the “hero” role in this riveting story. Highly independent, his ways of showing care and regard for others often are interpreted as sterile. A natural-born altruist, he has a penchant for ethics over glory and is resolute in his will to uphold what is just and condemn the unjust. In doing so, he is creative in his problem solving and will explore all avenues possible to prove his case, making him the perfect fit to delve headfirst into Gray’s peculiar case and the ominous secrets it holds.

The most palpable theme in this book is the human threshold for pain – what is a person capable of if pushed to their limits, and to what lengths will they go to gain control over their circumstances?  An internal longing for something tragically unattainable is what motivates each of the characters to pursue their respective courses of action. This creates an interesting call to action; as the characters realize what they have become, they are forced to cope with this new identity, even if that means forging a completely new sense of identity.

The development of events in this book is slow to ignite, reflecting the progression of actual real-life murder-mysteries, many of which are known to span decades of investigation, if solved at all. The chapters are short and digestible, yet still provide important pieces of information that are instrumental in contributing to the greater story. This is the type of story that ages like fine wine – the longer a reader becomes immersed, the more the story is built, complete with plot twists and gripping revelations.