Carnival Panic is a dystopian game show where contestants must solve dangerous room puzzles to claim a life changing prize. What was the inspiration for the setup to this exciting novel?

The initial inspiration for this novel occurred when I walked through the Kyari Pamyu Pamyu museum in Roppongi Hills, Tokyo. While there, I saw a display called “Candy Forest!” with unsettling pink rabbit statues, seen here https://matcha-jp.com/en/688. As I exited, I thought that what I had seen would make a great horror story. I pulled out my notebook and began sketching and writing ideas. I wrote about 10,000 words and then got stuck and put the story away for a few years.

It wasn’t until I went on an outing to Sanrio Puroland that I was able to continue writing the story. I often describe that day as one of the most uncomfortably horrible experiences I have ever had at a theme park. I had agreed to go to Puroland with a couple of friends, not knowing exactly what it was. After entering through the theme park gates, I realized that I was completely outside of my comfort zone.

On top of the immense claustrophobia were the inescapable sensory explosions. The air was pumped with all manner of sweet smells, there was constant music from individual speakers to the parades, it was hot due to the high summer temperatures, and there were lights everywhere both strobing and stationary. And when we stopped for lunch, all the food was of the sweetest kind; candied and dessert versions of its real counterparts. In contrast to my unpleasant experience, my friends were ecstatic and enjoyed every moment of that theme park, playing on the toys, going on the rides, and shopping with childlike enthusiasm.

On the train home, I knew exactly what I could write about and that became Carnival Panic.

What was the process like for imagining and writing the different rooms and puzzles you have in the book?

For the most part, the inspiration for the rooms came from various areas of Sanrio Puroland that I visited but with more sinister aspects. I also love to watch anime and at the time I was binging Deadman Wonderland so some of the themes from that anime made their way into the novel.

Your characters were all well developed and interesting. Who was your favorite character to write for?

Fletch. I enjoyed writing from her point of view because she is an unapologetic anarchist.

I have two finished novels at the moment which I am querying for publication. A science fiction alien invasion novel called Darkness in a Sky of Embers and a narrative fiction novel called Elephants Have No Sleeves.

As for currents projects, I am working on a supernatural murder mystery that follows the main character, Tzipora, who comes back from the dead to find her murderer. 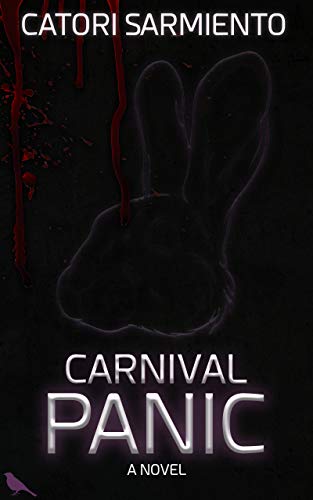 Candy makes the PonPon Bunnies sweet. Be careful if they’re angry. And watch out for traps! These are the dangers of competing in the Carnival Panic game show, a ruthless competition that tests the chosen competitors with mental and physical struggles. In order to claim the substantial monetary prize, the winner must solve a series of room puzzles and succeed in entertaining the fickle masses.